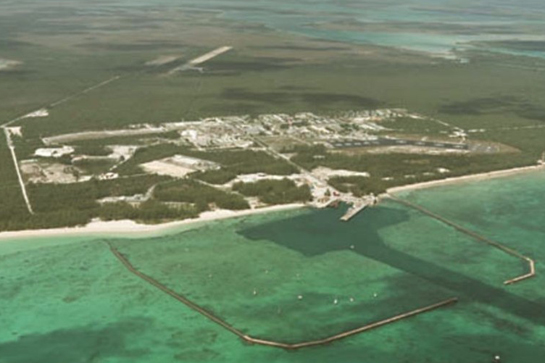 officially known as the Atlantic Underwater Testing & Evaluation Center. Many UFOs  as well as of USOs (Unidentified Submerged Objects) have been reported in its vicinity over the years. (The Navy denies all this, of course.) .AUTEC is located on the Bahamian island of Andros.

San Luis Valley  is located in the southwest corner of Colorado. Many UFO and Pranormal activities have been reported at this site. The valley is located close to a number of highly classified military installations.

Wenceslas Mine is located in southwestern Poland. This place has been rumoured to be the site of a secret World War II program to build a propulsion unit for Nazi UFOs.

True believers say the technology for this mysterious device, known as “The Bell,” came from a highly advanced alien civilization that was in cahoots with Hitler and the Third Reich.

However, more rational researchers point out that if the Nazis truly had superior technological help from ETs, they probably could have won WWII.

This place is located near the Ural Mountains in Russia.It has plenty of UFO sightings and paranormal activity. But many people who visit there frequently leave feeling more improved — both physically and mentally — than when they went in.

Some ufologists claim that more UFOs are seen over Scotland than any other country in the world. Many of these sightings are made within the Falkirk Triangle, an area near Edinburgh, where UFOs are reported on a near-daily basis.

Adding to the mystery, close to the middle of the Falkirk Triangle is the village Rosslyn, which is the site of Rosslyn Chapel, the mysterious church that has been connected to the Knights Templar (and not just in Dan Brown books).

When the Invasion of Iraq began in March 2003, U.S. forces paid particular attention to a place called the Little Zab River Valley, bombing it frequently and sending in scores of Special Forces. Located west of Baghdad, the valley was reportedly the site of what many called Saddam’s Area 51.

Ever since the first Gulf War, reports have come out of Iraq that Saddam’s forces had recovered a crashed UFO, brought it to the Little Zab River Valley, reverse-engineered some of its technology, and, from this, created a sort of extraterrestrial WMD.

About 70 miles northwest of Area 51 is a place so secret, even people in the U.S. intelligence community rarely talk about it. Called the Tonopah Test Range, F-117 Nighthawk stealth fighter was kept under wraps there for ten years without anybody but the president and the highest reaches of the U.S. military knowing about it.

The Nighthawks left Tonopah years ago but the highly secret base remains operational. This begs the question: What’s being kept there now?

While the M-Triangle might be the source of peace and enlightenment, another place in Russia is more bellicose; in fact, it’s known for rumored air battles between humans and UFOs. Kapustin Yar is a combination space launch facility and secret weapons base.

Many sources in Russia, including famous pilots and aeronautical experts, insist that Russian fighter jets and UFOs engaged in numerous dogfights over Kapustin Yar after UFOs attempted to interfere with some early Russian missile launches.

Kapustin Yar is a combination space launch facility and secret weapons base. Many sources in Russia, including famous pilots and aeronautical experts, insist that Russian fighter jets and UFOs engaged in numerous dogfights over Kapustin Yar after UFOs attempted to interfere with some early Russian missile launches.

Pine Gape, located in the geographic center of Australia, is considered one of the most secret places on earth. It is from here that the NSA most likely controls America’s newest fleet of spy satellites, many of which are said to eavesdrop on other nations and targeted individuals as well.

But Pine Gap is also known for some spectacular UFO sightings: witnesses report seeing interactions between UFO occupants and personnel at the base. Could the U.S. have drones operating from Pine Gap that are disguised to look like UFOs?