1129 Ridge Avenue looked like your average, ordinary house. Of course, as we all know, ordinary houses often have something else going on beneath. For this house in Pittsburgh, Pennsylvania, that something was a ghost story. The stories told there led many to call this the most haunted house in America. It has been written about and talked about by thousands of people all over the world.

Charles Wright Congelier was a wealthy man from Texas who fell in love with the Pittsburgh area, so much that he picked it as the place to building his new home. 1129 Ridge Avenue was a place of dreams, though it would soon became a place of nightmares. Charles finished construction during the 1860’s, and soon after moved in with his life Lyda and maid Essie.

Not long after the trio moved to the area, Charles began a relationship with Essie. Lyda caught the two in the act, and did what any woman in her position would do: she murdered them with a meat cleaver. Legend says that she whacked Charles in the head when he walked out of the room, before stabbing him a total of 30 times.

A neighbor later visited the house and found Lyda talking to herself and sitting in a rocking chair. Despite trying to talk to her, the woman refused to respond. Finally he decided to walk across the room and confront her, but still she refused to speak. Then he noticed the tiny pink blanket she cradled in her arms. With one touch the blanket flew open, and the head of Essie rolled across the room.

Oddly enough, the story doesn’t say what happened to Lyda. Did she serve time in prison? Or was she (more likely) sent to a mental institution? Instead the story focuses more on what happened later.

The house on Ridge Avenue was rumored to be haunted. No one would ever live there again, and through the years it sat vacant and abandoned. Before long kids began tossing stones at the house, breaking the windows and causing other destruction. No one could even find the courage to walk into the house, though it should have been filled with antiques and valuables.

The house sat empty, but in 1892 it was changed into an apartment house to hold local railroad employees. That didn’t last long though, as workers fled in the middle of the night. They claimed to hear a woman screaming and crying inside. The sounds were too much for them to handle.

Dr. Adolph C. Brunichter purchased the house in 1900 and immediately moved in. The doctor was unmarried and had no children, but he seemed quite friendly. For all intensive purposes it seemed as though he was happy in the haunted house. Then 1901 came.

Less than a year after moving into the house, neighbors heard someone screaming inside. They rushed inside to look, only to find a red flash occur inside, and the ground shake as though an earthquake was shaking the area. At the same time the glass inside the windows shattered.

Police were called to the scene where they found a fairly gruesome site. The basement of the house held decomposing bodies, and several headless women. Locals claimed that he was performing cruel and sadistic experiments on women, trying to find ways to keep them alive after their heads were removed. It appeared as though he succeeded in a few cases. Authorities began a search for the cruel doctor, but he had disappeared and the house was empty again.

Once again plans were made to turn the home into an apartment community, this time for employees of the Equitable Gas Company. Those living there heard a few strange things, but never reacted to them. Then workers discovered the bodies of two employees in the basement. One had a wood stake through the middle of his body, and the other had been hanged from the ceiling beams.

Two strange things happened during the 1920’s that led to more stories and fear of the Ridge Avenue house. The first was that Thomas Edison arrived, and claimed to feel strange things inside the house. Later the police believed they had found the missing doctor. The man in police custody told them everything about his activities in the house including admitting to murdering and torturing several minutes. Despite the confession the police could find no proof, and released him. He once again disappeared.

Not long after his release, a nearby gas storage facility exploded. The explosion destroyed everything in the nearby vicinity, and damages could be seen as far away as 20 miles. The house at Ridge Avenue completely vanished without a trace.

Though the story itself is strange, there are indications that it was little more than a story. One woman who died in the explosion was actually named Marie Congelier, but she was of no relation to the family that once owned the house. In fact, there is no proof that there ever was a Lyda or Charles, or even an Essie.

Marie Congelier was a member of the actual Congelier family who built the house at 1129 Ridge Avenue, but this family finished the work in the 1880’s. This same family continued to own the house until Marie was killed in the explosion, and the house was not destroyed. It was actually torn down by the city during the expansion of the highway.

Though this ghost story has stood the tests of time, it is clear that it is little more than just a story. 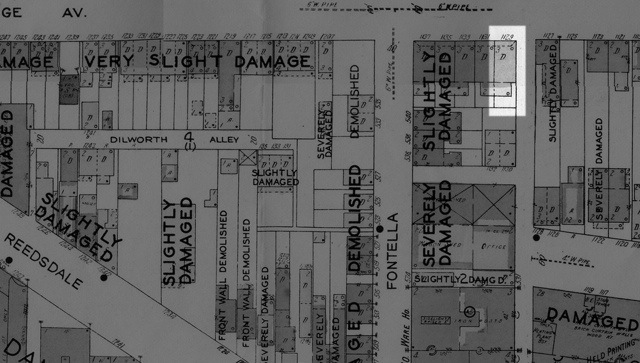