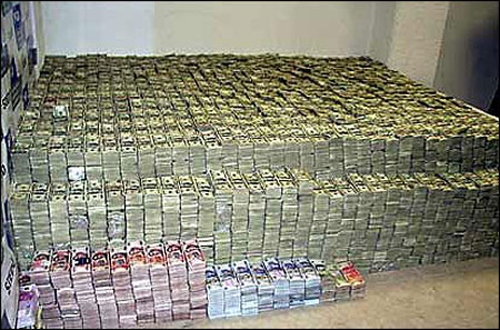 The Loomis Fargo Bank Robbery was the $17.3 million cash robbery of the Charlotte, North Carolina, regional office vault of Loomis Fargo & Company on the evening of October 4, 1997, by armored car driver and vault supervisor David Scott Ghantt. An FBI criminal investigation (which became international in scope) ultimately resulted in the arrest and conviction of eight people directly involved in the heist, as well as 16 others who had indirectly helped them, and the recovery of approximately 95% of the stolen money. This robbery is the largest cash robbery on U.S. soil.

Ghantt had struck up a relationship with a fellow Loomis Fargo employee, Kelly Campbell; they continued to maintain contact even after Campbell left the company. In August 1997, Campbell informed Ghantt about an old high school friend of hers named Steve Chambers, who could assist Ghantt to execute a massive cash robbery of the Loomis Fargo vault in one night. Chambers had broached the possibility of a robbery to Campbell earlier in the summer.

The plan was for Ghantt to commit the actual robbery and then quickly leave the country for Mexico – but to leave the bulk of the cash with Chambers. Chambers would then occasionally wire Ghantt money and see to his basic financial needs; when “the heat was off,” Ghantt was to re-enter the U.S. and the money would be split up among all of the co-conspirators.

Chambers had no intention of wiring any money to Ghantt and intended to have him killed to keep him from implicating the others. Chambers had told Campbell to do whatever she needed to do to get Ghantt to commit the robbery. Campbell led Ghantt to think she loved him and they would flee to Mexico together, but she actually wanted to make a better life for herself in the U.S. 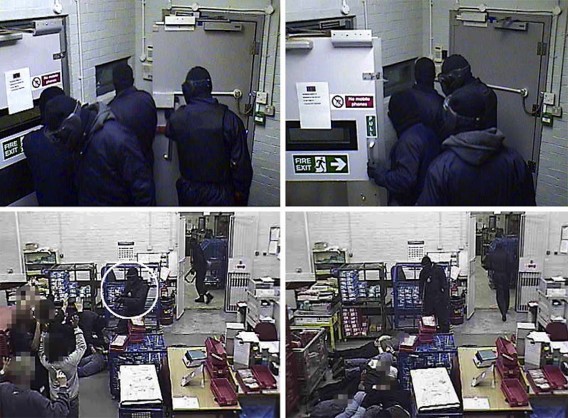 With the plan in place, Ghantt sent a newly hired employee he had been assigned to train home early (reportedly, at 6 p.m.) and then proceeded to load a little more than $17.3 million in cash (approximately $11 million of which was in $20 bills) into the back of a company van. Outside of the building, Ghantt met up with Campbell, Chambers, and others who were involved in the plot, and drove off to a printing business called Reynolds & Reynolds in northwest Charlotte. From there, the money was moved from the armored car to private vehicles. Then, keeping with the plan, Ghantt took $50,000 (the maximum that could be taken across the border by law without further authorization) with him and left for Mexico, winding up at the popular Yucatan Peninsula resort of Cozumel.

Loomis Fargo employees could not open the vault the next morning, and called the police. The police almost immediately called the FBI, since 95% of the money handled at the facility was owned by banks. This technically made it a bank robbery — a federal offense.

Investigators considered Ghantt to be the prime suspect almost from the beginning. He was the only employee unaccounted for the next morning, and videotapes recovered at the Loomis Fargo Charlotte office showed Ghantt removing “cubes of cash” and loading it into a Loomis Fargo armored van for over an hour. Two days later, when the FBI found the Loomis Fargo armored van, they discovered almost $3.3 million in cash left in the back of the van; it was later discovered that the thieves had miscalculated the sheer bulk of the small denomination currency, and that they simply left the cash that they could not take with them in the back of the van. Investigators also found Ghantt’s pickup truck, abandoned at the warehouse. Inside the truck, they found Ghantt’s ring and surmised this as a sign of Ghantt’s intention to end his relationship with his wife.

Although the FBI investigation was able to quickly connect Ghantt to Campbell, connecting Ghantt to Chambers was a more difficult task. Tips had led the FBI to begin monitoring Chambers’ (and his wife’s) activities, but it was not until the FBI recorded a phone call from Ghantt in Mexico that the final connection was made. By then, the FBI had become greatly concerned for Ghantt’s personal safety; they had learned of Chambers’ murder for hire scheme.

The FBI was inadvertently aided by the gang members’ extravagant spending. They had initially agreed to control their spending for a year or two, in the belief that the government would vigorously track the spending habits of any and all suspects for at least a year before relenting. However, Chambers had no intention of following those rules, believing the FBI would never connect him to Ghantt. He and his wife, Michele, moved from their mobile home in Lincoln County to a luxury house in the wealthy Cramer Mountain section ofCramerton. They kept several furnishings from the previous owners, including a velvet Elvis. They also bought a BMW Z3 with cash and made several large purchases, including a $600 statue of a Native American. Campbell used part of her share of the money to buy a Toyota Sienna minivan in two cash installments.

More tips for the FEDS

An additional tip reached the FBI when Michelle Chambers made a large deposit at a bank. She had previously been making frequent small deposits to avert suspicion. But after one visit, she asked a teller “How much can I deposit before you have to report it to the feds?” followed by “Don’t worry, it is not drug money,” the bank filled out a suspicious activity report, which ultimately reached the FBI.

Ghantt’s spending in Mexico was extravagant at first. He had stayed in a luxury hotel and paid for expensive food and activities such as scuba diving and parasailing. Ghantt reported to Chambers that his supply of money was running low, but Chambers sent Ghantt just $8,000. Ghantt, in order to conserve this money, curtailed his spending. He also took various measures to change his appearance, such as shaving, after a patron at a restaurant pointed out to him that he “looked like the man who robbed a bank of $20 million.”