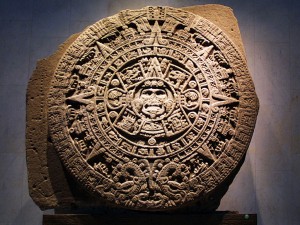 With 21st December 2012 coming up soon, we thought we better look into the facts concerning the mayan 2012 prophecy to see whats truth and whats fiction.

For those that have no idea about the Mayan calander, and the importance of the looming date: here is some facts you need to consider.

The Mayan people who lived thousands of years ago consturcted the most amazing (and accurate) calander the world had seen, or would see until the early 1800’s.

The mayan calander was used for prediciting long and short cycles, based on solar knowledge, and religious dates.

260 days feature in the religious calander, with each “year” made up of 20 weeks. These years are represented by special images.

The solar long count is more of interest however! – the calendar was divided into a  series of measurements. Each day is called a K’in. Twenty K’in are a Winal, 18  Winal are a Tun, 20 Tun are a K’atun and 20 K’atun are a B’ak’tun.

So what does this mean then ?

So why is that doomsday ? – well thats the point really, the calander ends – but it does not say the earth will end! However lots of possible evidence has been used to try and show that the end of the long count will start a doomday event. Here is the best (or worse) of the Mayan doomsday “proof”

The Mayans had knowledge beyond man! – in fact UFO’s and Aliens visted them, helped them make a complicated calander to warn us in the future that the world would end. Plenty of Ancient Alien evidence can be found ( you just have too look hard )

Revelations of the Mayans 2012 and Beyond