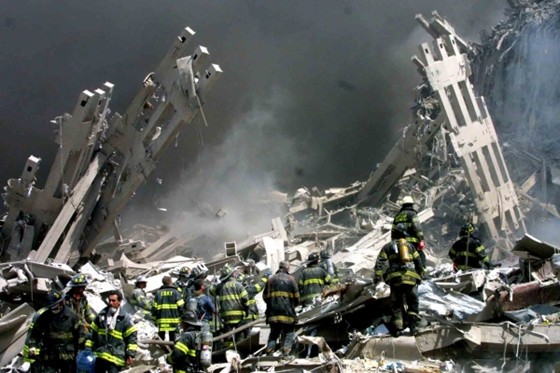 Nearly 13 years after the 9/11 terrorist attacks, the extent of Saudi involvement in the deaths of almost 3,000 people remains unclear — but according to members of Congress and the families of victims, information about this has been suppressed ever since the publication of a 2002 congressional investigation into the plot.

Prior to the release of the final report of the Joint Inquiry into Intelligence Community Activities Before and After the Terrorist Attacks of September 11, 2001, the Bush administration classified a 28-page section in the name of national security.

Though speculations, accusations, and denials have swirled around these pages over the past decade, the call for their declassification has steadily grown since December 2013, when House Representatives Walter Jones (R-NC) and Stephen Lynch (D-MA) introduced Resolution 428, a two-page document urging President Obama to release them to the public. Nine other representatives from both parties have co-sponsored the resolution.

In April, Jones and Lynch sent a letter to Obama reiterating their request. They are planning a September 11 press conference with relatives of victims to highlight the issue. Adding fuel to the campaign, various family members have recounted to the media how President Obama had promised them that he would release the material.

The 28 pages make up part four of the report, a section titled “Finding, Discussion and Narrative Regarding Certain Sensitive National Security Matters.” They are widely believed to implicate Saudi officials or describe support from Saudi intelligence for the hijackers, 15 of whom were Saudi citizens.

“On the one hand, it is possible that these kinds of connections could suggest, as indicated in a CIA memorandum, ‘incontrovertible evidence that there is support for these terrorists [—————————],’ ” states an introductory note in the section. “On the other hand, it is also possible that further investigation of these allegations could reveal legitimate, and innocent, explanations for these associations.”

Former Senator Bob Graham of Florida, who co-chaired the joint Senate-House investigation, dispensed with the equivocation and told VICE News that the redactions are a “cover up.”

“I’ve said this since the first classification of the 28 pages,” he remarked. “It’s become more and more inexplicable as to why two administrations have denied the American people information that would help them better understand what happened on 9/11.”

Graham said that the 28 pages describe the financing of the attacks.

“Follow the money,” he said. “That will illuminate other significant aspects of 9/11.”

Though Graham could not go into further detail, he was quite frank in an affidavit filed in 2012 as part of a lawsuit brought by the families of 9/11 victims against the Saudi government.

“I am convinced that there was a direct line between at least some of the terrorists who carried out the September 11th attacks and the government of Saudi Arabia,” Graham told the court.

The Saudi kingdom has always denied any complicity in the attacks.

“The idea that the Saudi government funded, organized, or even knew about September 11 is malicious and blatantly false,” Prince Bandar bin Sultan, a member of the royal family and an ambassador to the US from 1983 to 2005, said in 2003. “There is something wrong with the basic logic of those who spread these spurious charges. Al Qaeda is a cult that is seeking to destroy Saudi Arabia as well as the United States. By what logic would we support a cult that is trying to kill us?”

Around this time, senior Saudi officials reportedly called for the pages to be declassified in order for them to assess and rebut the allegations, but the Bush administration refused. A letter signed by 46 senators urging President George W. Bush to declassify the 28 pages was also rebuffed.