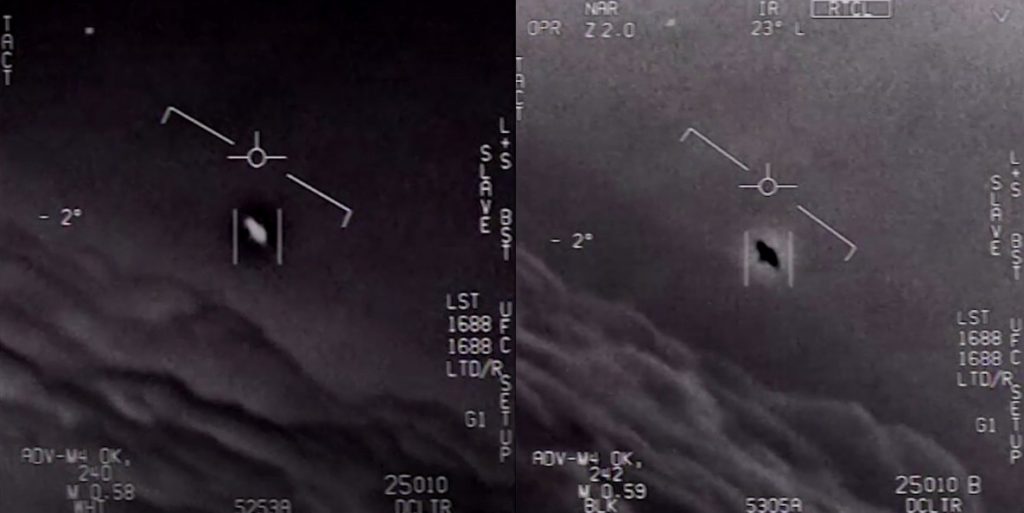 A UFO sighting captured by camera in East Coast in 2015 is considered one of most important of the many recent sightings of the past few years. Video footage released to the public shows a mysterious object traveling above the Atlantic Ocean. A US Navy pilot captured the video aboard the F/A-18 jet flying at an altitude of 25,000 feet.

The shocking two-minute footage presents military personnel in awe as they cannot believe what they see live in front of them. A strange object maneuvers and speeds in way as to defy our abilities to understand modern day aviation and aeronautics. The pilots confirm they have no idea what they are watching. The Stars Academy, a private research company did not divulge where they precisely obtained the footage. While the public often demands more details of the event some suggest that the actual location could be secured through the Freedom of Information Act.

Three UFO similar videos were made known to the public last year. According to reports, the Pentagon has a $22-million spending budget for a UFO research project. Let’s face it something is going on and the government wants to know! This particular venture apparently has concealed secrets and only tells what they want us to know.

Based on the observations of pilots and radar operators, the United States does not possess aircraft with such incredible agility. Christopher Mellon, a former intelligence official who observed this video comments the origin of the object is still a mystery. Mellon speculates we might possibly have evidence of an alien civilization visiting here on earth, but of course, this claim is not verified.

UFO sightings continue to emerge, and we continue to ask what are they and do such incredible phenomena really exist?

We have radar blips and numerous blurry photos and video but does the military have some real form of physical scientific proof confirming their existence? The quest for the real answers continues…