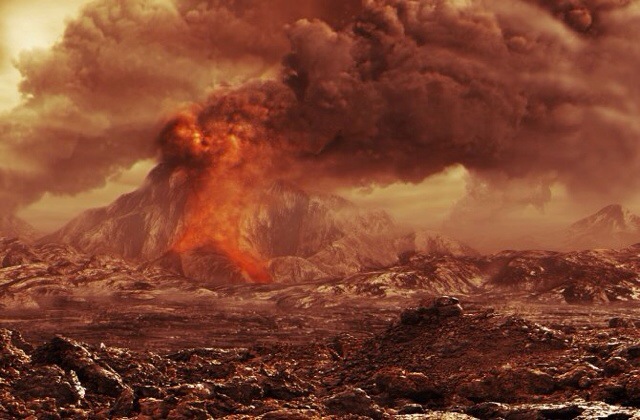 Scientists have long suspected that volcanoes played a huge role in the evolution of cloud-shrouded Venus, the second planet from the sun.

Now, images from Europe’s Venus Express orbiter are showing that volcanic eruptions may not just be a thing from the past.

“Venus might have ongoing volcanism,” planetary scientist Alexander Bazilevskiy, with the Max-Planck Institute for Solar System Research in Germany, said at the Lunar and Planetary Science Conference in Houston on Monday.

Bazilevskiy and colleagues constructed mosaics from images taken during the orbital passes and computed the relative surface brightness.

They found four transient flashes, estimated to be between 980 degrees and 1,520 degrees Fahrenheit – well above the planet’s normal 800 degree Fahrenheit surface temperature.

“We were looking for these spots for several years (and) didn’t find,” anything, Bazilevskiy said.

He and colleagues figured the chance of seeing anything was extremely slim, just about 8 percent.

“Then we found something,” Bazilevskiy said.

Four places, actually, all near Maat Mons, a giant shield volcano on Venus that scientists believe last erupted 10 million to 20 million years ago.

Follow-up analysis suggests the bright flashes could be lava flows stretching 16 miles or so, a chain of cinder cones, or a volcanic hotspot similar to what has been found on Jupiter’s volcanically active moon Io.