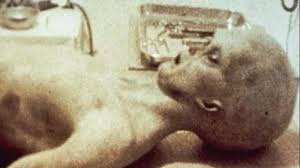 The alien autopsy is a 17-minute black-and-white film supposedly depicting a secret medical examination or autopsy of an alien by the United States military.

The strange film footage was released to the world by Brit entrepreneur Ray Santilli, who claimed he obtained it in 1992 from a retired US military cameraman while seeking archive footage of Elvis Presley in the US.

He went on to sell the footage to TV stations in 33 countries – before fellow film maker Spyros Melaris revealed last year that they had actually faked the footage using animal organs and pig brains in a London flat – and managed to fool the world for a decade.

But the story has taken a new twist after a leaked memo was allegedly sent to aerospace billionaire Robert Bigelow from one of his physicists Eric Davis.

It claims former CIA scientist Kit Green was “briefed three different times during and after his tenure at CIA on topics relevant to UFOs and the Roswell Incident Alien Autopsy”.

The memo, believed to have been leaked from the archives of late astronaut Edgar Mitchell, states: “After Kit left the CIA he was called into the Pentagon by a person in uniform.

“This person showed Kit the alien autopsy photos and reports etc. The photos of the alien cadaver Kit saw were consistent with the cadaver seen in the 1995 Santilli film/video.

“Kit was asked to professional evaluate the material provided to him at this particular briefing.”

Green provided his professional evaluation of the footage in January 2001, according to the leaked document.

A summary of his evaluation stated: “The Alien Autopsy film/video is real, the alien cadaver is real, and the cadaver seen in the film/video is the same as the photos Kit saw at the 1987/88 Pentagon briefing.”

The memo also includes an email in which Green reveals alien forensic tissue and organs were being stored at Walter Reed-Armed Forces Institute for Pathology Medical Museum in Washington DC.

When asked why there was so much debunking of the Santilli video when it first aired, Green said: “The PR folks around Santilli are indeed not operating with a full set of dishes, are a little dense and not very nice to boot.”