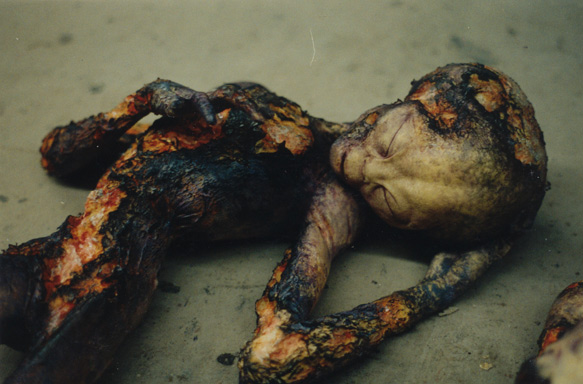 The Varginha incident, Brazil – The truth

In 1996 in a Varginha it is reported that a number of living aliens where captured following a UFO crash. Local residents claim the aliens roamed the streets of the town in the early hours of the 20th January, a number of which got rounded up and escorted away swiftly by the armed forces, aided by local firemen. Rumours suggest not all the aliens got captured, and some escaped to the near by jungle.

A number of seperate encounters through the day got reported in the brazilian press and there are currently 100-200 eyewitnesses still living in Varginha. Most of these reports claimed sightings of an alien with a large head and very thin body, with V-shaped feet, brown skin, and large red eyes.

The case could easily be swept away as an urban tale, if it was not for the following evidence.

NORAD warning of a UFO going down

Around midnight between January 19-20 NORAD (North American Air Defense Command) contacts their Brazilian alike CINDACTA (I Centro INtegrado de Defesa Aerea e Controle de Trafego Aereo or Intergrated Center on Air Defense and Air Traffic Control ) and warnes them of a UFO coming down over southern parts of Minas Gerais state. This is witnessed and leaked by both an Brazilian Air Force man and an employee at the rdara facility at Air Force Base VI Comar, who recived the information, all this according to John Carpenter and Ricardo Varela Correa. On January 20, after midninght, at aprox. 1:30 AM the farmworkers-couple Augusta and Eurico Rodrigues were wakened by the roams of the farm-cows and sheeps. As they looked out the window to see what was up they saw the animals running from one side to the other. As they looked up the sky the saw a silent UFO without lights. John Carpenter gives us an image of the UFO:

”It was a submarine-shaped “mini-bus” that was trembling like a curtain and emitting smoke or fog as it descended to at least 5 meters above the ground. A military witness now admits that it crashed and he was part of the debris retrieval. Material was twisted and lightweight. (source: AJ Gevaerd in my video)”

The Rodrigues couples farm is placed in a coffe district located 10 kilometers (6 miles) northwest from the town of Varginha, midway between Varginha and Tres Coracoes. The house sits at the edge of the road. And the UFO is belived to have crashed between 1:30 AM and 5:00 AM that night.. An American civilian was present when the cigarrshaped UFO was loaded aboard a flatbed truck in the early morning of January 20 – a saturday, according to Brazil’s UFO Magazine. Between the alleged crashsite and the outskirts of park Jardim Andere, where the EBE later on was first spotted and captured, lays a forest. A probable scenario is that a number of EBE’s outlived the crash and went by foot (!?) through the woods and ended up in the park of Jardim Andere 6 miles southeast. Local people immediatly associated this spaceship with the EBE’s who appeared 7 hours later. There has also surfaced statements by a military source that a farmer (not Rodrigues) shot one of the EBE’s that crawled out of the crashed cigarr-shaped UFO.