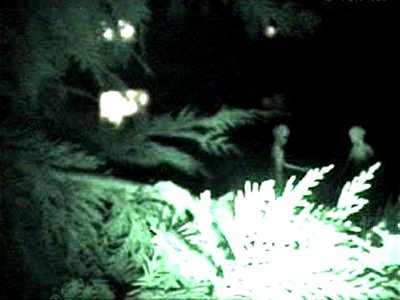 Being a UFO investigator, and in communication with a lot of people all over the world, at times I get a story that is just too good to be true. In my opinion, the following is one of those. But you can be your own judge. The story itself is believable, yet the accompanying pictures are the “too good to be true” part of the account. The pictures are said to be still frame captures from video cassette, and they are certainly good enough for everyone to at least have a look at them. According to the anonymous sender, this is what happened.
London, England, 1999:

Mr. Unknown was awakened sometime in the middle of the night by the louder than usual sounds of his neighbor’s dog. Being shaken from slumber, he had a very strange feeling, either from something odd going on outside, or the remnant of a bad dream. To rule out the former, he took a walk outside to see if he could pinpoint the cause of the dog’s heightened state of alarm. He was immediately drawn to a strange light in the sky. The light seemed to emanate from three spots, the brightest being in front of two others behind it, creating a triangular shape. He was staring at a triangle-shaped UFO.

Mr. Unknown sped back into the house and grabbed his video camera. He was hoping to film the UFO before it disappeared, but instead he filmed what he claimed to be a type of small, ghost-like beings who seemed to be rummaging around behind his fence. The total length of the film was about four (4) minutes.
The strange beings made a sound which was barely audible, and somewhat muffled. The sounds of the small beings had attracted him to the area. Mr. Unknown was frank in stating that he was a student of the Paranormal, and had experienced strange occurrences before. If any further information becomes available, I will add it here.