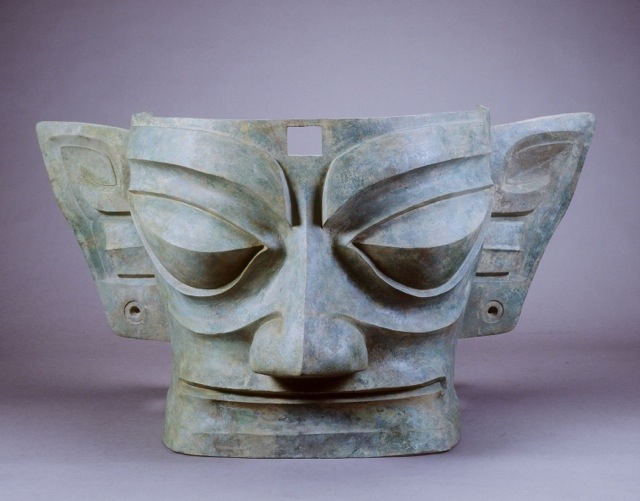 Since 1929, more than 10,000 relics, dating between 5,000 and 3,000 years ago have been unearthed in the city’s Sanxingdui Ruins. The excavations have yielded some of the most significant Chinese archaeological discoveries of the 20th century.

Archaeologists around the world were excited by the unearthing of large palatial remains in 1980, the remnants of eastern, western and southern walls in 1984 and the discovery of two large sacrificial pits in 1986.

These discoveries proved that Sanxingdui contains the ruins of an ancient city that was the political, economic and cultural center of the ancient Shu Kingdom.

A metropolis of its time, Sanxingdui boasted highly developed agricultural and mining systems, and produced ceramics and sacrificial tools. 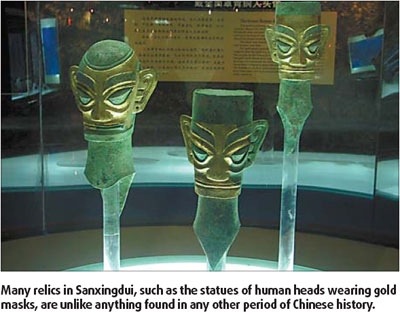 Archaeologists say that the Sanxingdui Ruins also dispel theories that the Yellow River was the sole starting point of Chinese civilization.

Of more than 10,000 relics unearthed in Sanxingdui, the nearly 1,000 found in 1986 in the two sacrificial pits are considered the most valuable. In these two pits, bronze, gold, jade and marble artifacts, pottery, bone implements, elephant tusks and objects made of ivory were found. Archaeologists also discovered cowries and roughly 800 large bronze relics.

In addition to the many bronze and gold masks, the most valuable finds from the two pits included the bronze statue of the Shu king, a gold scepter and a bronze “spirit tree”.

With a length of 1.42 meters, a diameter of 2.3 centimeters and a weight of 0.5 kilograms, the design on the gold scepter features fish, birds and human figures. The scepter is believed to be a symbol for a monarchic or theocratic order, or a combination of the two. 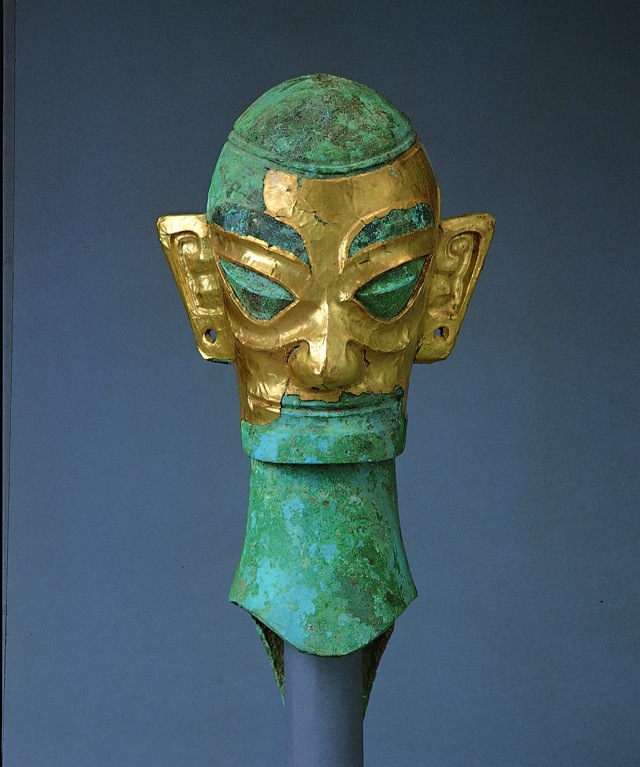 Many theories also surround the fall of the Sanxingdui civilization, which seemingly disappeared without a trace, leaving behind objects unlike anything found in any other period of Chinese history.

Archaeologists have been left wondering what the purpose of the objects was and how such an ancient culture, at the very beginning of Chinese civilization, could be so advanced.

Some speculate that aliens might be behind the mysterious relics after locals in the area alleged that they spotted UFOs in the area 20 years ago.

The Sanxingdui Ruins cover 12 square kilometers, of which only four have been excavated. Chen Xiandan, deputy curator of the Sichuan Provincial Museum says: “It is likely that more exciting archaeological discoveries will be made.”