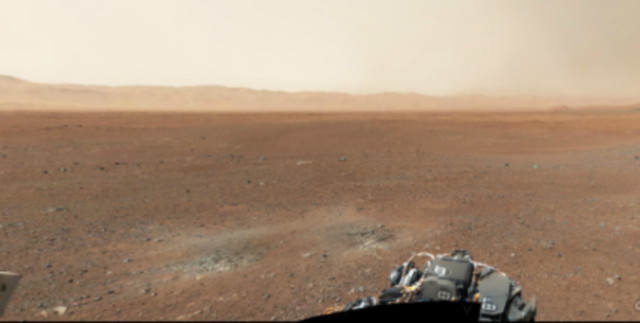 This amazing panaroma must be seen

It includes the highest part of Mount Sharp which is approximately 12 miles (20 kilometers) from the rover.

The colors on this panorama are enchanced to give the same colors as it would have under lights on earth.
The firm has also created a full screen version which can be seen on its web site. He says minimal editing of the images occurred. The image was created from the stunning panoramic images that Curiosity has been beaming back to earth.

This is the latest panorama released by NASA July 2012. It was assembled from 817 images taken between Dec. 21, 2011, and May 8, 2012, while Opportunity was stationed on an outcrop informally named ‘Greeley Haven’. on a segment of the rim of ancient Endeavour Crater.

The colors in this panorama are what NASA call false colors read more below.