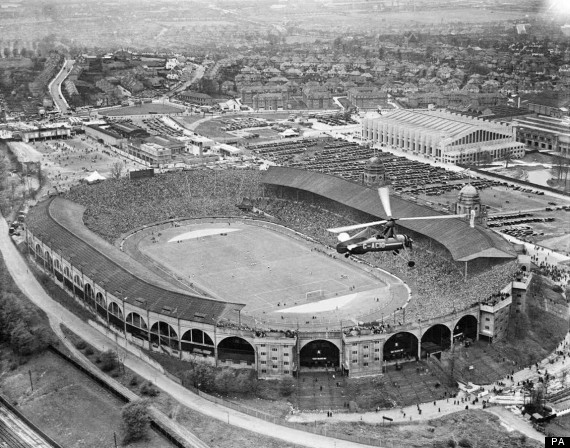 The public have been asked to help identify mystery British aerial photographs from the early 20th century.

More than 15,000 images from one of the earliest and most significant collections of aerial photography are now freely accessible online for the first time.

The photos on the Britain from Above website, launched today, have gone through a painstaking process of conservation and cataloguing

Many of the photos, which range from 1919 to 1953, were so old and fragile that they were close to being lost forever.

With the help of the English Heritage and the Royal Commissions on the Ancient and Historical Monuments of Scotland and Wales, thousands of photos were digitised so that the public can enjoy these unique images.

Highlights from the collection include the first boxing match at Wembley Stadium in 1924,  crowds on the banks of the River Clyde watching the first voyage of the newly-built RMS Queen Mary in 1936, and the Thames Flood of 1947.

Experts could not identify all of the 15,000 pictures, but the Britain from Above website has interactive features where users can add information about the images, share personal memories, download images and customise their own themed photo galleries.

The photographs come from the Aerofilms Collection which was acquired for the nation in 2007 when the company faced financial difficulties.

The entire collection is an archive of over a million British aerial photographs taken between 1919 and 2006, many of them taken by pilots and photographers who were veterans of the First World War.

Anna Eavis, head of archive at English Heritage said that the Aerofilms Collection embodies all that is exciting about aerial photography.

Rebecca Bailey, head of education and outreach at the Royal Commission on the Ancient and Historical Monuments of Scotland said: “We hope that people today will be able to immerse themselves in the past through the new website, adding their own thoughts and memories to this remarkable collection.”

Do you recognise any of the places in these photos?