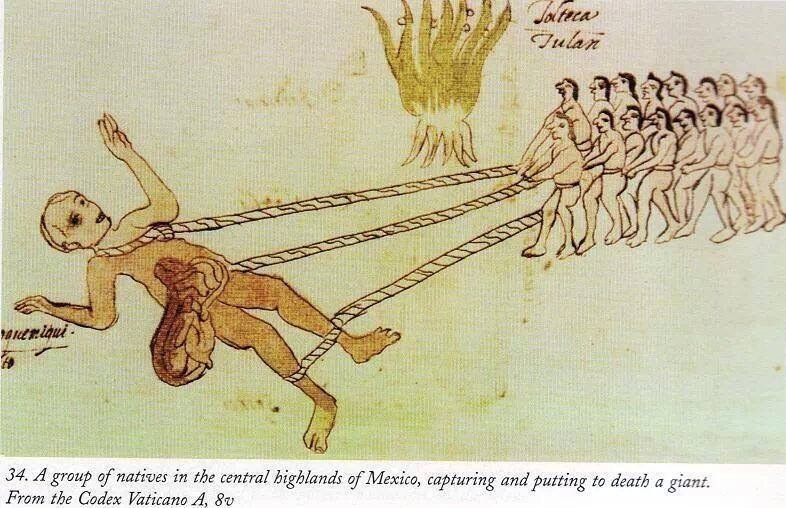 Descriptions of giants are common among religious books and ancient history texts worldwide and as well in Central America. Like famous western world ancient giants such as Goliath, Og and the Nephilim primarily documented in the Bible, there is documentation of giants who lived, fought, and lost their lives in Central America in ancient times and until the arrival of the Spanish conquistadors.

Italian translation of a Spanish colonial-era manuscript focused on the Tolteca-Chichimeca culture in the Tehuacan Valley named Codex Ríos (AKA Codex Vatican A OR Codex Vaticanus A) depicting Aztec warriors killing and capturing a giant humanoid. The giant’s name mentioned and written in a text near his image that reads Quinametzin – one of the old ones. The name next to the man roping him is Tolteca/Tulan the people preceded the Aztecs:

According to the translated Aztec accounts of the Spanish invasion, contained in the fascinating The Broken Spears edited by Miguel Leon-Portilla, one of the Aztec hero’s Tzilacatzin, was a giant.

When the Conquistadors first entered Tenochtitlan with hostile intent, it was Tzilacatzin who with three large stones (it says the kind they built walls out of-whatever that means) threw them at the Spaniards chasing them out of the city.