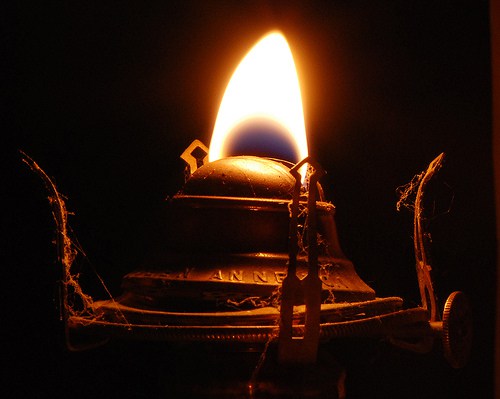 Lamps that kept on burning without using any fuel were discovered all over the world during the Middle Ages. These lamps were sealed into tombs, supposedly to ensure the deceased had light to guide them on their way to the afterlife. Some of these tombs were opened years later, and the lamps were still burning.

In India, the ancient Hindu temple of Jwala Ji, located in the lower Himalayan town of Jawalamukhi in Himachal Pradesh, has a constantly burning blue flame that comes from the rocks in various places within the temple, and is said to have been constantly burning since the beginning of its known history.

In A.D. 140, a lamp was found burning in the tomb of Pallas, son of an ancient Roman king. This lamp had been burning continuously for over 2,000 years. Neither water nor blowing on the flame could put it out. The only way to extinguish it was to drain a strange liquid contained in the lamp bowl.

In 1534, when King Henry VIII broke away from the Catholic Church, he ordered the dissolution of monasteries in England, and it was during these times that many tombs were plundered. In Yorkshire, in the tomb of the father of Constantine, a burning lamp was discovered. His death was recorded in 300 AD, showing that the lamp had been burning for over 1200 years.

In 1540, during the time of Pope Paul III, a burning lamp was found in an ancient tomb on the Appian Way at Rome. The tomb was believed to belong to Tulliola, daughter of Roman statesman Cicero. She died in 44 B.C. The lamp, which was sealed in the vault, had been burning for around 1,600 years.

In China, there were historical records of ever-burning lamps. It was believed that in the tomb of Emperor Qin Shi Huang, there were such lamps. Since no one has found his tomb, it cannot be confirmed whether the lamps are still alight.

Archaeological records show ever-burning lamps were discovered in ancient temples and tombs all over the world, not only in India, China, Egypt, Greece, and many other countries known to have had ancient civilizations, but even in Italy, the United Kingdom, Ireland, France, and many other places.

Unfortunately, many of these burning lamps were destroyed by vandals and tomb robbers who feared these objects possessed supernatural powers.

In England, there have been records of people entering old tombs. It was said that the lamps inside were automatically destroyed when secret traps were triggered.

According to one record, a person discovered that a lamp hung over the arch of a tomb, illuminating the interior. As this person walked forward, a tremble went through the floor. Then a statue in armor was seen holding some kind of weapon in hand, and it moved forward to destroy the lamp.