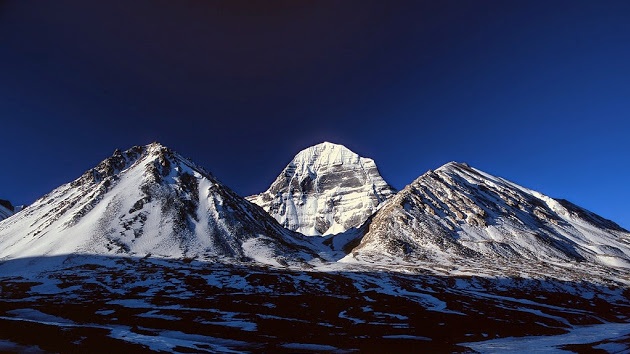 MYSTERIOUS PLACES – Mount Kailash is a legendary place in Tibet. With an impressive height of 6718 meters, Mount Kailash represents the axis of the world or the stairway to heaven for the people in the region.

Both Buddhists and Hindus, as well as older religions, recognize Mount Kailash as an ancient holy place. It is advised not to climb the mountain, since that would be sacrilege and bring misfortune.

Mount Kailash is indeed an axis, if only because it is the source of major Asian rivers like the Indus River. Its shape it remarkable and has led to speculations over the centuries. Russian researchers have even proposed that the top of Mount Kailash is actually a giant man-made pyramid from ancient times. If this is true, then human history has to be re-written. It is larger than any pyramid known today.

Perhaps the Buddhist legends about Mount Kailash gives the most interesting indication of its true significance. Buddhists believe that ‘their’ sorcerer Milarepa challenged the sorcerer of the Bön religion, Naro Bön-chung. There was a fierce superhuman battle, but both sorcerers turned out to be equally powerful. They then decided to race each other to the top of Mount Kailash. Now what is interesting is that one of them used some sort of magic drum to reach the top, while the other won by using ‘rays of the sun’.

What does this sound like, if we take it literally? Did one of these legendary figures use a spacecraft and the other some form of teleportation? What if these magicians were actually ancient aliens, using advanced technology that primitive humans could only explain by calling them ‘gods’?

Please compare the remains of Puma Punku, in an equally high place but on another continent. The ancient ‘gods’ favored high places and built installations there. Ezekiel was brought to see one of these places. Zeus lived on one. So what about Mount Kailash? Is it another node in a global grid, built with some alien technology that we cannot actually see and do not yet understand?