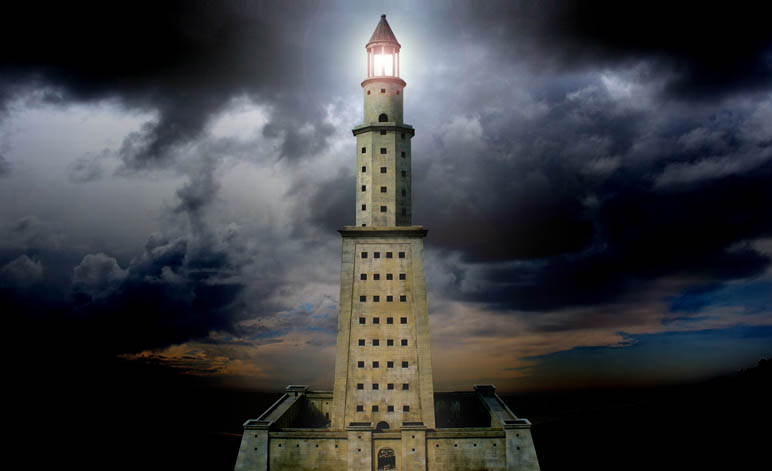 Considered to be one of the seven wonders of the ancient world, construction of the 130m tall Pharos Lighthouse probably began around 280 BC on a small island just off the coast of Alexandria, Egypt. Originally commissioned by the Macedonian general, Ptolemy Soter who became ruler of Egypt after the death of Alexander the Great, it was completed during the reign of his son Ptolemy Philadelphos. Today the island of Pharos has become part of the mainland and shields a natural harbour. The building was erected to house a brilliant light to assist ships to find the port at night. Historic reports claim that the light could be seen nearly thirty miles out to sea and that it housed a beam so bright that could blind sailors and burn enemy ships. This has given rise to the theory that only an electrical arc lamp and a huge concave mirror could have created this effect. Proponents of this theory admit that the source of the power is a mystery but that an electric light is the only possible explanation for the extraordinary intensity of the lamp.

The lighthouse survived from 247 BC to 1303 AD when it was severely damaged in an earthquake. By 1408 it was simply a pile of rubble which was then used to build a medieval fortress by Al-Ashraf Sayf al-Din Qa’it Bay, the Mamluk Sultan of Egypt, which remains standing today. It is possible to still visit Qaitbay Castle. 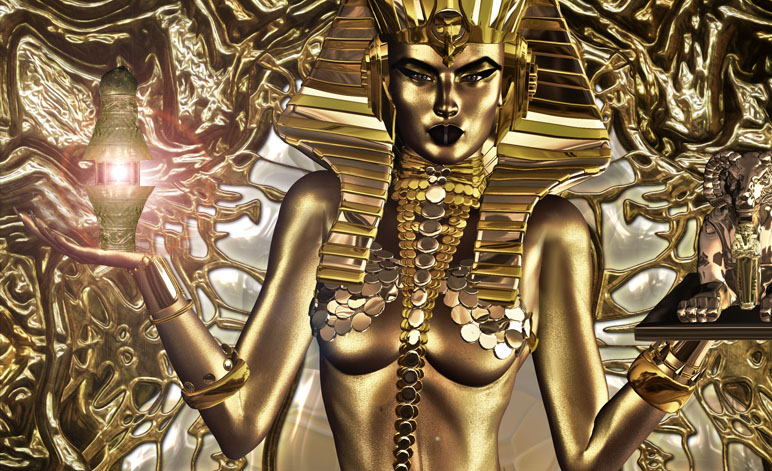 Aurelius Augustine was born in North Africa in 354 AD and spent much of his early life dedicated to passionate pursuits, philosophy and academic studies. At the age of 32 he became a Christian and after some time in Rome he journeyed to Hippo Regius (near modern day Annaba) in Tunisia where he was persuaded to become first a priest and later Bishop of the town. He remained an academic at heart and was one of the most prolific writers of his time. In his work, City of God, (book 11 chapter 6) he describes a temple in Egypt dedicated to Venus (Isis) in which there is a lamp that requires an asbestos base and is completely unaffected by the weather. The correct translation is under the picture to the left. It worth pointing out that some websites misquote this passage to emphasise the argument while others suggest that Augustine himself visited the temple. In fact, Augustine was referring to books written by earlier travellers. However, the story is intriguing and was considered relevant enough to be selected as an example by the Bishop. St. Augustine suggested that the lamp might have been the work of corrupted men or even a resident demon.

(The quotation from St. Augustine’s book
The City of God, Book XXI, Chapter 6:)

” … that there was, or is, a temple of Venus in which a candelabrum set in the open air holds a lamp, which burns so strongly that no storm or rain extinguishes it, and which is therefore called, like the stone mentioned above, the asbestos or inextinguishable lamp.” 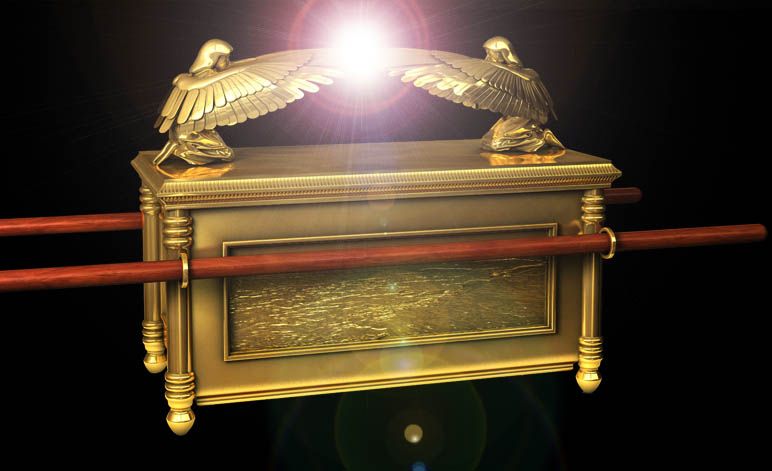 ARC OF THE COVENANT

According to the Old Testament, which records the history of the Abrahamic religions, God summoned Moses to Mount Sinai (Horeb) and gave him the Ten Commandments inscribed on two tablets of stone . This list of divine laws specified the way in which the people were to live their lives. Five of these laws form the basis of all modern legal systems. To store the stone tablets the people of Moses built a chest according to specific instructions provided to them by God. This was to be the Ark of the Covenant and since its construction there have been countless references to its ‘power’ such as its ability to part waters, to destroy buildings such as the walls of Jericho and to emit beams of light sometimes referred to as the power of God. Based on descriptions found in the Old Testament a number of researchers now believe that the wings of the cherub may have acted like an arc lamp or as two electrical charged poles that could induce a sense of the divine. This proposal was recently featured on the Discovery Channel’s Myth Busters programme and found plausible.

Said to have extraordinary powers. May have been an arc lamp. Featured in Episode 29 of Mythbusters, a Discovery Channel programme first broadcast on the 23rd March 2005. The Ark of the Covenant has been lost for many centuries and may have been removed from the Temple of Solomon during the Babylonian conquest of Jerusalem in 587 BC. 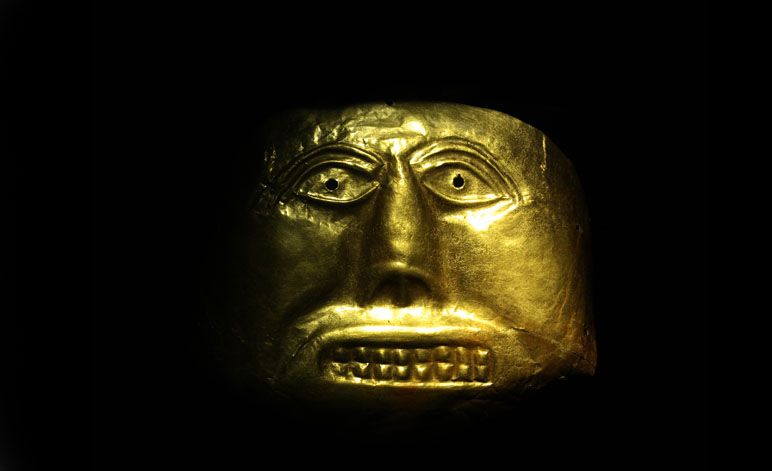 Over the centuries a number of artefacts ranging from coins to small religious statues have been discovered with very thin coatings of gold or silver that is typical of modern electroplating techniques. In 1938 Wilhelm König, the Director of the National Museum of Iraq, discovered a series of small objects that strongly suggested the use of electroplating using electrical current rather than the less effective electrochemical process. Several small vases dating from 2,500BC appeared to have been electroplated and were kept at the Baghdad museum. In 1851 archaeologist August Mariette claimed to have found electroplated objects at a dig near the Sphinx in Egypt. In 2006 Stefano Natali and Giuseppe Giovannelli of the University of Rome discovered a coin that had been deliberated plated with silver around 250 BC to create a forgery. A number of pre-Columbian golden artefacts show traces of plated surfaces. There are undoubtedly many more items in the collections of the great museums that may well turn out to have been electroplated rather than solid gold or silver items.

It is fair to point out that there are techniques that can mimic electroplating. The first is electro-deposition which is possible without an electric current and the Tumbaga process that involves the production of a seemingly pure gold object even though it has a high percentage of copper. To achieve this the surface copper is oxidised and dissolved leaving only a gold coating which is polished into a plated surface.