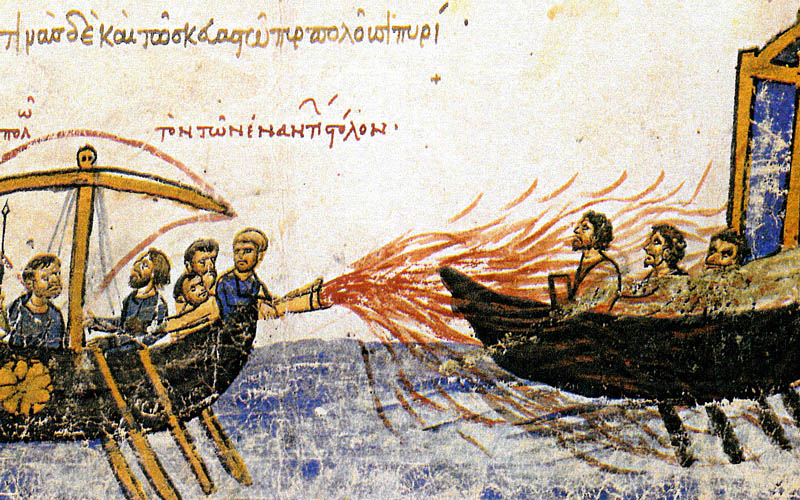 Fire has been used in war since the earliest records began and may thousands of years later modern man still depends on the same power taken to its extreme in the form of high explosives, cannons, missiles, guns and of course flame throwers. However, sometimes a weapon is developed that is so far ahead of its time and the military capabilities of the other forces that it changes the course of history. Greek Fire or Sea Fire as it is sometimes called was one such development and became the secret weapon of the Byzantine Empire. At its most basic it was a fluid chemical mixture that could be ignited and then sprayed onto enemy ships and personnel. Its effects were devastating because this fluid could not be extinguished with water.

In fact, it was said to be able to burn under water and that any attempt to damp it down only made the flames burn more fiercely. It would cling to all materials and burn the flesh off the body of a man in seconds in a manner very similar to modern day phosphorus weapons. The formula was kept so secret that no one today knows how it was made nor have scientists been able to recreate it using the ingredients available at the time. Its invention has been attributed to the Syrian Engineer and architect Kallinikos around 675 – 673 AD who had fled from Baalbek (Heliopolis) in what is today Lebanon. An alternative source of the knowledge is attributed to an Angel who revealed the recipe to Constantine personally on the agreement that it should remain a secret of Christianity forever. The one person who did attempt to reveal the secret of the fire was allegedly struck down by a bolt from heaven. Whatever the source the discovery and subsequent use of Greek Fire certainly saved Constantinople from the Muslim conquest and held back the rapid invasion of Europe. It was certainly discovered at a critical time that could not have been more opportune and it saved the Byzantine Empire.

This coincidence deserves much more investigation. As to the recipe it is believed it contained an early form of refined petroleum, naphtha, sulphur, nitre, saltpeter and other ingredients that may have even included phosphorus. Resins are also mentioned as a possible component and recently there has been the suggestion that iron dust may have been included. Until more accurate records are discovered how it was made will remain a mystery and yet another lost technology of the ancients.