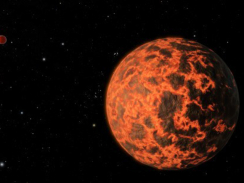 Astronomers discovered the newfound alien planet, known as UCF-1.01, using NASA’s Spitzer Space Telescope. The diminutive world is just 33 light-years away, making it a near neighbor of Earth in the cosmic scheme of things.

“We have found strong evidence for a very small, very hot and very near planet with the help of the Spitzer Space Telescope,” study lead author Kevin Stevenson, of the University of Central Florida (UCF) in Orlando, said in a statement. “Identifying nearby small planets such as UCF-1.01 may one day lead to their characterization using future instruments.”

UCF-1.01 remains a planet candidate — rather than an officially recognized planet — because researchers have yet to measure its mass. But the discovery team thinks it’s the real deal.

“Despite the lack of a confirmed mass, the team is confident future observations will verify our findings,” said co-author Joseph Harrington, also of UCF.

Stevenson and his colleagues weren’t looking for new planets when they found UCF-1.01. It popped up unexpectedly in Spitzer observations of the Neptune-size exoplanet GJ 436b.

By studying these brightness dips in detail, the team was able to determine several basic properties of UCF-1.01. The planet’s diameter is likely about 5,200 miles (8,400 kilometers), making the world two-thirds as wide as Earth.

“The planet could even be covered in magma,” Harrington said.

If UCF-1.01 ever had an atmosphere, it almost certainly has boiled away by now, researchers added.