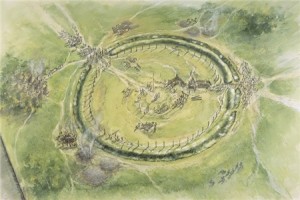 Archaeologists have discovered that Stonehenge had a huge stone sibling just two miles to the north-east.

Using powerful ground-penetrating radar, which can ‘X-ray’ archaeological sites to a depth of up to four metres, investigators from Birmingham and Bradford universities and from the Ludwig Boltzmann Institute in Vienna have discovered a 330-metre long line of more than 50 massive stones, buried under part of the bank of Britain’s largest pre-historic henge.

“Up till now, we had absolutely no idea that the stones were there,” said the co-director of the investigation Professor Vince Gaffney of Birmingham University. 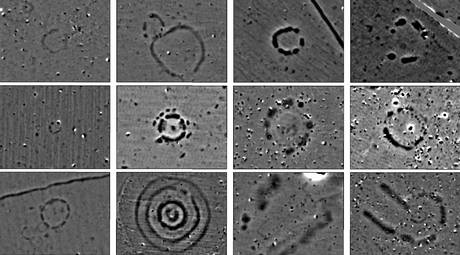 Investigators discovered evidence of dozens of new monuments close to Stonehenge The geophysical evidence suggests that each buried stone is roughly three metres long and 1.5 metres wide and is positioned horizontally, not vertically, in its earthen matrix.

However, it’s conceivable that they originally stood vertically in the ground like other standing stones in Britain. It is thought that they were probably brought to the site shortly before 2500BC.

They seem to have formed the southern arm of a c-shaped ritual ‘enclosure’, the rest of which was made up of an artificially scarped natural elevation in the ground.

The c-shaped enclosure – more than 330 metres wide and over 400 metres long – faced directly towards the River Avon. The monument was later converted from a c-shaped to a roughly circular enclosure, now known as Durrington Walls – Britain’s largest pre-historic henge, roughly 12 times the size of Stonehenge itself.