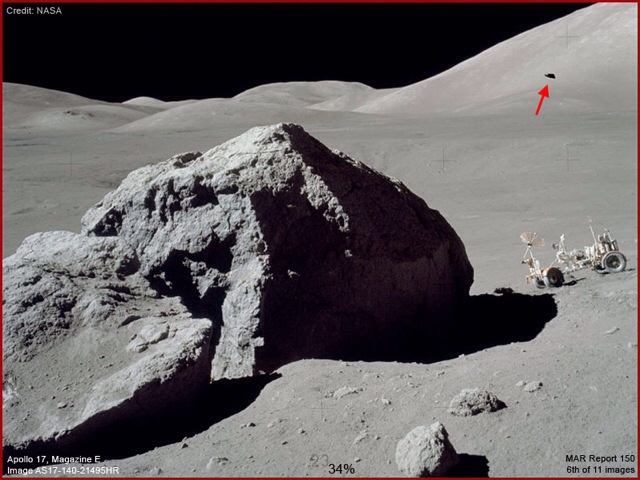 Let’s face it, we appear to be looking at a UFO on the Moon in 1972. It is obviously something artificially produced. Note its odd bulky industrial shape (perhaps shape distorted by shadow) and its lack of any evident airfoil principles demonstrated anywhere along the body. This suggests some sort of propulsion system unknown to us not dependent on speed and lift in any kind of atmosphere. Note that there may also be thin projections sticking off from it. I would guess that this object is at least as large as the rover (under it and in the foreground much closer to us) but much more bulky.

Could it be that, while astronauts Cernan and Schmitt on the ground were examining and camera recording their surroundings (truth not likely fully revealed here), someone else was closely examining them that wasn’t suppose to exist? If you were these two men and were really on the Moon alone worried about getting home and this object you were unprepared to see flew this close and low so near your position and between you and the Lander as your only way home, do you think you would have developed some messy pants?

Well they probably took it fairly in stride and only a little unnerved. This was after all the last manned mission to land on the Moon to the present date, at least as publicly admitted to. In early Apollo missions, there were a number of communications between Earth mission control and the crew at the Moon discussing very excitedly UfOs and other things that clearly shook them up before they had presence of mind to start talking in code about them. So this Apollo 17 crew almost certainly knew what to expect.

I think we can all understand why such an anomalous object was removed from some of the data displaying this scene. We are just lucky that someone got careless and let this slip by to be included of all places in the NASA Apollo 17 Image Library. Now I have no idea whether this object’s discovery was made by anyone else in the past or if any material was ever published on it or an official explanation made for it? If so, please bring any such published material to my attention for inclusion here as I would be curious to know how they dealt with this UFO if other than the usual of just ignoring it? 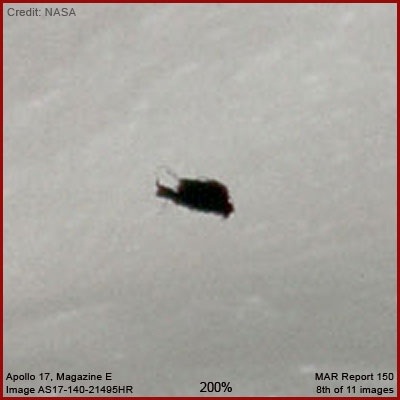 read more about these amazing pictures