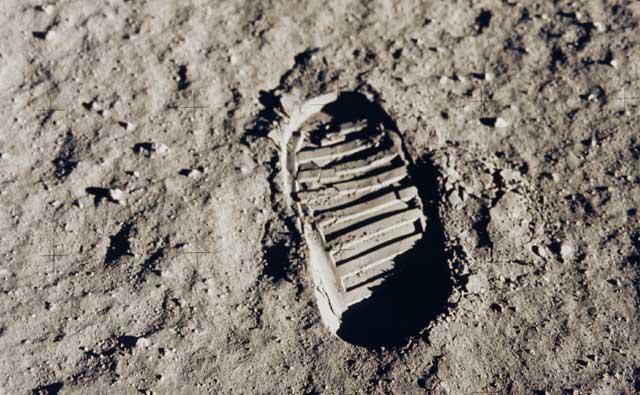 Men on the Moon, the race, the drama and the conspriacy

Project Apollo, the United States’ manned moon landing programme, culminated in 1969 with Apollo 11. Mission commander Neil Armstrong’s famous words, “That’s one small step for man, one giant leap for mankind”, spoken as he stepped onto the lunar surface, were heard by an estimated 600 million television viewers.

in simple terms, it was close and the general public could see it clearly.

The Apollo program was the third human spaceflight program carried out by the National Aeronautics and Space Administration (NASA), the United States’ civilian space agency. Conceived during the Presidency of Dwight D. Eisenhower as a follow-on to Project Mercury, which put the first Americans in space, and Project Gemini, which developed the space travel techniques needed, Apollo succeeded in landing the first humans on Earth’s Moon in 1969 through 1972. Apollo began in earnest after President John F. Kennedy proposed the national goal of “landing a man on the Moon and returning him safely to the Earth” by the end of the 1960s in a May 25, 1961 address to Congress.

Kennedy’s goal was accomplished with the Apollo 11 mission when astronauts Neil Armstrong and Buzz Aldrin landed their Lunar Module (LM) on the Moon on July 20, 1969 and walked on its surface while Michael Collins remained in lunar orbit in the command spacecraft, and all three landed safely on Earth on July 24. Five subsequent Apollo missions also landed astronauts on the Moon, the last in December 1972. In these six spaceflights, 12 men walked on the Moon.

Apollo ran from 1961 to 1972, and was supported by the two-man Gemini program which ran concurrently with it from 1962 to 1966. Apollo used Saturn family rockets as launch vehicles. Apollo / Saturn vehicles were also used for an Apollo Applications program which consisted of three Skylab space station missions in 1973–74.

Apollo succeeded despite the major setback of a 1967 Apollo 1 cabin fire that killed the entire crew during a pre-launch test. Six manned landings on the Moon were achieved. A seventh landing mission, the 1970 Apollo 13 flight, failed in transit to the Moon when an oxygen tank explosion disabled the command spacecraft’s propulsion and life support, forcing the crew to use the Lunar Module as a “lifeboat” for these functions to return to Earth safely.

Apollo set several major human spaceflight milestones. It stands alone in sending manned missions beyond low Earth orbit; Apollo 8 was the first manned spacecraft to orbit another celestial body, while the final Apollo 17 mission marked the sixth Moon landing and the ninth manned mission beyond low Earth orbit. The program spurred advances in many areas of technology incidental to rocketry and manned spaceflight, including avionics, telecommunications, and computers. Apollo also sparked interest in many fields of engineering and left many physical facilities and machines developed for the program as landmarks. Its command modules and other objects and artifacts are displayed throughout the world, notably in the Smithsonian’s Air and Space Museums in Washington, DC, Kennedy Space Center Visitor Complex in Florida, Space Center Houston in Texas, the U.S. Space and Rocket Center in Alabama, and the Kansas Cosmosphere and Space Center in Hutchinson, Kansas.

Apollo 11 was the spaceflight which landed the first humans, Americans Neil Armstrong and Buzz Aldrin, on the Moon on July 20, 1969, at 20:18 UTC. Armstrong became the first to step onto the lunar surface 6 hours later on July 21 at 02:56 UTC. A third member of the mission, Michael Collins, remained alone in lunar orbit until they returned from the surface about 15 hours later. All three astronauts returned to Earth safely after travelling in space for 8 days.

Launched by a Saturn V rocket from Kennedy Space Center in Merritt Island, Florida on July 16, Apollo 11 was the fifth manned mission of NASA’s Apollo program. The Apollo spacecraft had three parts: a Command Module with a cabin for the three astronauts which was the only part which landed back on Earth; a Service Module containing propulsion, electrical power, oxygen and water; and a Lunar Module for landing on the Moon. After being sent to the Moon by the Saturn V’s upper stage, the astronauts separated the spacecraft from it and travelled for three days until they entered into lunar orbit. Armstrong and Aldrin then moved into the Lunar Module and landed in the Sea of Tranquility. They stayed a total of about 21½ hours on the lunar surface, including about 2½ hours outside the spacecraft. After lifting off in the upper part of the Lunar Module and rejoining Collins in the Command Module, they returned to Earth and landed in the Pacific Ocean on July 24.

Broadcast on live TV to a world-wide audience, Armstrong stepped onto the lunar surface and described the event as “one small step for [a] man, one giant leap for mankind.” Apollo 11 effectively ended the Space Race and fulfilled a national goal proposed in 1961 by the late U.S. President John F. Kennedy in a speech before the United States Congress, “before this decade is out, of landing a man on the Moon and returning him safely to the Earth.”