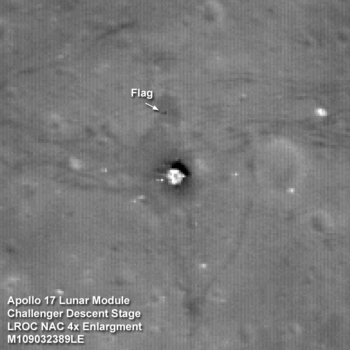 How can you tell thats a flag?

NASA has now revealed that most of the flags from the Apollo missions are, indeed, still standing, with the one exception being that of Apollo 11. Interestingly, Buzz Aldrin always said that he thought that the lander’s exhaust burst blew over the flag as he and Neil Armstrong left the lunar surface.

Photographed from 15 miles above the lunar surface, the sites of man’s first steps on another world come out in surprising detail. The bottom of the lunar landers are visible, as is equipment left behind by the astronauts, and, most surprisingly, the astronauts’ footprints themselves, seen as dark trails of gray against the lighter, undisturbed lunar surface.

But really, can you identify a flag from 15 miles? is the picture even real ? – after all we have all seen the fake Bin Ladden pictures that the US governement still claim are real.

In addition to the Apollo landing sites, there are other interesting lunar sights caught on camera, too. One surprising find was the long presumed lost Lunokhod 1 rover, launched by the Russians during the time Americans were setting foot on the Moon. During the year in which it operated, Lunokhod 1 drove about 6 miles on the Moon’s surface. Once the signal went dead in September 1971, the rover was presumed lost, most likely turned over or lost in a crater.  Some even suggested it had been taken by aliens. That all changed when the rover was found upright on the lunar surface, where it continues to contribute to science.

Most of the other images are regarding interesting facets of lunar geology, including, but not limited to “skylights” and the “dark side of the Moon.” While purely natural in nature, they are nonetheless interesting.