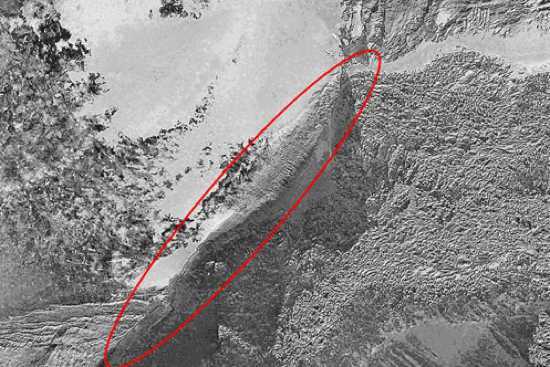 Theories surrounding the Ararat Anomaly arose from a single black and white photograph taken in 1949 by a USAF recon plane performing routine intelligence gathering of the Ararat massif, which was in an area of military interest at the time. This famous photo shows a shoulder of Mount Ararat, only 1300 feet from the summit, covered in snow, with an odd-looking object on the very precipice of a steep slope.

Conspiracy theorists, many of them Biblical literalists, claim that the odd-looking object if Noah’s Ark, which the Bible states “came to rest on the mountains of Ararat” after the Great Flood. Since the Bible pluralizes “mountains,” the question still stands, “Which mountain of the area?” Mount Ararat is the tallest of the Armenian Plateau, but the whole area of Eastern Turkey and Western Armenia is mountainous, and Mount Ararat is actually two peaks, with the main peak a prominence for miles around.

The anomaly appears to be a very rounded elongation teetering on the edge of a slope, buried under ice and snow, and it has so roused the curiosity of the U. S. government that planes and satellites have been used to take numerous photographs of it, not all of which, the theory claims, have been made public. The best public views of it can be found on the Internet for free, and the anomaly does look very much like a big boat, approximately 1,000 feet long and 200 to 300 feet wide, which roughly matches the Bible’s description of the Ark.