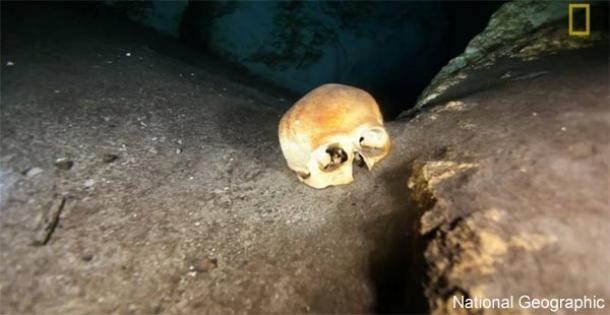 A flooded sinkhole in southern Mexico that terrifies local villagers has just been explored by underwater archaeologists, who found the submerged cavern littered with elongated skulls and human bones.

The underwater cavern, known as Sac Uayum, is a cenote located in Mexico’s Yucatán Peninsula. A cenote is a natural pit resulting from the collapse of limestone bedrock that exposes groundwater underneath. They were sometimes used by the ancient Maya for sacrificial offerings.

Sac Uayum sits just outside the ruins of the ancient Maya city of Mayapán, about 40 kilometres south of Mérida, the capital of the Mexican state of Yucatán. Mayapán was a major political centre from the 12th to the 15th century AD and contained a city enclosed within a stone wall. Within the city walls, there were around 40 cenotes which would have served as vital sources of water for the 17,000 residents and may have even been the reason for the city to have been built there.

However, Sac Uayum is not a typical cenote and local legend says that the mysterious cavern is guarded by a feathered, horse-headed serpent. Older residents of the nearby village of Telchaquillo tell stories of people seeing the serpent perching in a tree, leaping up, spinning around three times, and diving into the water. In fact, the villagers do not want to go near the site and there is much fear surrounding what lies inside.

To investigate the cenote, archaeologist Bradley Russell and his team spent two weeks diving into its submerged reaches. Before they began, shaman Teodormio San Sores prepared a traditional ceremony called jeets’ lu’um (“calming the earth”) to ask the gods permission for the researchers to enter the cavern and to placate the legendary feathered serpent, who locals believe will snatch anyone who gets too close.

From the first day of diving archaeologists discovered that there may be a very real reason why the villagers fear the place. It appears something terrible took place there and perhaps knowledge of this was passed down over the centuries leading to the development of myths and legends.

The archaeologists discovered two chambers connected to each other via a tunnel in the submerged cavern with bones scattered across the floors. So far the team has identified ten skulls in the first chamber and five in the second, with more likely awaiting discovery among the rocks and sediment.

However, these are not normal skulls – they are elongated, which is consistent with many others that have been found in burials from the same period. According to Russell, the skulls were intentionally flattened during infancy, although this is a practice that archaeologists are still seeking answers for. According to Brien Foerster, not all elongated skulls were intentionally made to be that way. The bones also bear no marks that would indicate cause of death, so the people probably weren’t sacrificed. Very few artefacts were found and none to suggest that these people were among the elite and receiving any kind of special treatment.

The skulls and remains have been found to belong to males and females, adults and teenagers, but the question that still remains unanswered is – what were they doing there? Most residents of Mayapán were buried under or near their houses, so this wasn’t a normal cemetery. Russell wonders whether the location of Sac Uayum is a clue. The cenote lies to the south of Mayapán, the direction that the Maya associated with the underworld—humankind’s mythical place of origin, known as Xibalba. The dead might have been buried here to await the next cycle of creation. Alternatively, Russell suggests they could have been plague victims. “You wouldn’t want them near the rest of the population. And you wouldn’t want to drink the water either,” he said. This would explain why the cenote seems to have been deliberately excluded from the city boundaries.