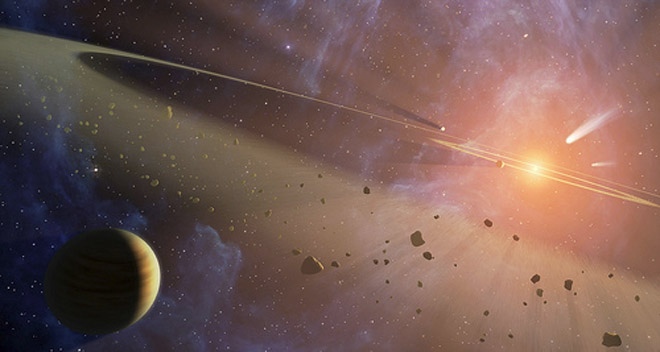 Rather than looking for aliens who use interstellar radio signals to say “hi,” an alternative search strategy is simply to spy on any mega-engineering projects that an advanced civilization might be undertaking. Veteran SETI astronomer Jill Tarter calls this strategy “SETT” — the Search for Extraterrestrial Technology.

A new science paper by Duncan Forgan at the University of Edinburgh in Scotland and Martin Elvis at the Harvard-Smithsonian Center for Astrophysics in Cambridge, Mass., suggests we look for evidence of a very ambitious macro-engineering project: the wholesale mining of an asteroid belt. The asteroid material may be mined to build space colonies, solar power satellites or maybe even an entire “ringworld,” as imagined by sci-fi writer Larry Niven.

What’s more, precious metals are in high demand for technologies such as computers, high-speed networks and mobile phones. So-called “green technologies” of the future, such as hydrogen fuel cells, will also place a demand on rare resources.

The unconsolidated debris from the birth of planets, asteroids provide a smorgasbord of elements and minerals for harvesting. Meteorite samples suggest that large quantities of gold, platinum, iron, nickel, magnesium and silicon, among other elements, are abundant on asteroids.

We have already found asteroid belts around other stars. In fact, the star Epsilon Eridani has three nested belts. NASA’s Spitzer Space Telescope has been prolific at picking out the thermal signature of extraterrestrial asteroid belts.

Any growing space faring civilization would recognize asteroids as an abundant source of raw materials. They are the coal cars in a freight train of planets.

But finding asteroid belt anomalies that would convincingly point to the handiwork of space aliens would be very tricky. First, we would need to presume that the civilization was so advanced that it built — at huge expense — the transportation infrastructure for getting back and forth to the asteroid belt. Advanced robots would have done all the heavy lifting for mining and transporting asteroid material to space-based factories.

Forensic clues could come from identifying a chemical disequilibrium in the belt caused by the extraction of specific minerals and elements. Second, the system might look odd due to the disassembly of its larger asteroids. Finally, large quantities of dust from mining might give the belt an unusual temperature distribution.

The researchers predict that persistent mining over long periods will artificially reduce the number of larger asteroids in the system debris. All that would be left would be pebble-sized and smaller dusty debris. No space telescope envisioned could inventory the true asteroid sizes, but differences in the dust distribution might offer clues.

The bottom line is that asteroid systems may be as diverse and unusual as the planetary systems they inhabit. Therefore, anomalies alone could not conclusively prove the existence of alien asteroid miners. Finding an oddball-looking asteroid belt might be suggestive of astroengineering, but it certainly would not prove it.

An intense program of SETI follow-up observations might look for telecommunications leak-off signals, or there may be searches for Earth-sized planets in habitable zones near the asteroid belt. Nevertheless, SETI may be the most practical and fastest strategy for finding advanced life off Earth.

It will be two decades or more before we have large-enough space telescopes to survey nearby exoplanets and looks for biomarkers. And those data will not give a clue as to how evolved the native life is.

A space colonizing civilization, maybe no more than a millennium advanced from us, must be doing something ambitious that we can notice from light-years away with modest-sized telescopes. Maybe the evidence is already in our astronomical archives; we simply don’t recognize it, yet.