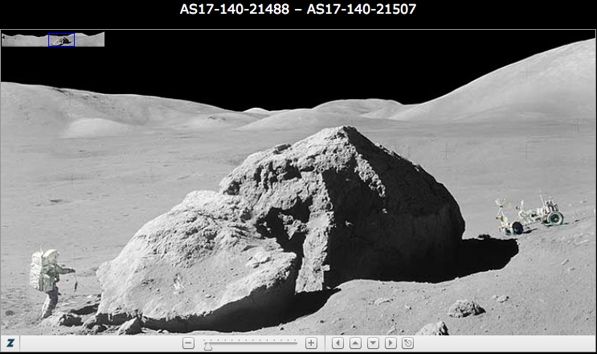 One of the first reported astronaut encounters with alien ships occurred during the Apollo 11 mission, according to distinguished author Timothy Good. In his book, “Above Top Secret,” he asserts that both Neil Armstrong and saw UFOs during their historic 1969 Moon landing. Good states that he recalls hearing one of the two astronauts make a reference to a “light” in or near a crater during the live television transmission.
Aldrin Admits Seeing UFOs:

Mission control requested additional information about the “light,” but there would be no response from either astronaut. In a 2006 television documentary, “Apollo 11: The Untold Story,” Buzz Aldrin admitted for the first time publicly that the astronauts saw UFOs on their trip to the Moon, but they were not allowed to discuss this information on the live audio feed to NASA. He stated that he felt it would have caused a “panic.”

Another man who was a former NASA employee, Otto Binder, would come forward with information regarding radio ham operators who had their own VHF receiving equipment that enabled them to hear the actual live uncensored audio feed from NASA to the astronauts and vice versa. Parts of these communications were made public. Later, these tapes would be lost. Here is an excerpt:

These “Babies” are Huge:

NASA: What’s there? Mission Control calling Apollo 11…Apollo: These “Babies” are huge, Sir! Enormous! OH MY GOD! You wouldn’t believe it! I’m telling you there are other spacecraft out there, lined up on the far side of the crater edge! They’re on the Moon watching us!

The former chief of NASA Communications Systems, Maurice Chatelain, would also go public with information regarding the Apollo 11 story. In 1979, he would confirm that Armstrong indeed had made the aforementioned communication regarding UFOs on or in a crater. Chatelain stated:”The encounter was common knowledge in NASA,” he revealed, “but nobody has talked about it until now.”

Two well respected Russians, one a physicist and the other a scientist, would also come forward with their statements confirming the Apollo 11 encounter. Dr. Vladimir Azhazha, a physicist and Professor of Mathematics at Moscow University made the following statement:

“According to our information, the encounter was reported immediately after the landing of the module. Neil Armstrong relayed the message to Mission Control that two large, mysterious objects were watching them after having landed near the moon module. But his message was never heard by the public-because NASA censored it.”

Soviet scientist, Dr. Aleksandr Kazantsev, stated that Buzz Aldrin took color movie film of the UFOs from inside the module, and continued filming them after he and Armstrong went outside. Dr. Azhazha claims that the UFOs departed minutes after the astronauts set foot on the lunar surface.

Chatelain would also confirm that Apollo 11 transmissions were deliberately muted on more than one occasion, therefore keeping the secret information from the public. Chatelain’s claims must be viewed with high credibility considering his professional background. He was an electronics engineer with Convair-his specialty being telecommunications. He was also head of an electromagnetic research group which developed systems for Ryan.

While employed at North American Aviation, he designed and built the Apollo communications and data processing systems. He would eventually own eleven patents. He also made the shocking statement that “all Apollo and Gemini flights were followed, both at a distance and sometimes also quite closely, by space vehicles of extraterrestrial origin-flying saucers, or UFOs, if you want to call them by that name. Every time it occurred, the astronauts informed Mission Control, who then ordered absolute silence.”

He also said: “I think that Walter Schirra aboard Mercury 8 was the first of the astronauts to use the code name ‘Santa Claus’ to indicate the presence of flying saucers next to space capsules. However, his announcements were barely noticed by the general public.” It would later become almost common knowledge that the term “Santa Claus” was a NASA code word for a UFO.