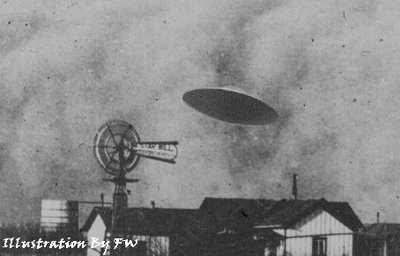 Although it would be five years or so before the Wright brothers would make the first controlled aircraft flight, this pre-flight era would become known as the “great airship” period in Ufology. Whereas many of today’s unexplained UFO sightings are assigned to conventional flying craft, that luxury did not exist in 1897. Anything flying that was not a bird or blimp was a UFO.

About 6 o’clock one morning the early risers of Aurora were astonished at the sudden appearance of an airship which has been sailing around the country. It was traveling due north and much nearer the earth than before. Evidently some of the machinery was out of order, for it was making a speed of only ten or twelve miles an hour, and gradually settling toward the earth.

“Aurora, Tex. — (UPI) — A grave in a small north Texas cemetery contains the body of an 1897 astronaut who was ‘not an inhabitant of this world,’ according to the International UFO Bureau. The group, which investigates unidentified flying objects, has already initiated legal proceedings to exhume the body and will go to court if necessary to open the grave, director Hayden Hewes said Wednesday.”

Not of this World:

UPI also picked up the story, and the legend was spread far beyond the borders of Texas. There were a number of eyewitness accounts of the incident later published, and they all agreed with the basic facts. An unknown craft had crashed into the town, strange debris was found, and a being “not of this world” was found in the wreckage. One intriguing account, although second-hand, came from a 15-year-old girl. Her parents had visited the site, and claimed that the alien pilot was a “small man.”

There is also evidence of a military cover-up. Soon after the crash, military personnel came to Aurora. Could they have been responsible for the removal of the alien body? For a time, there was a headstone for the body, but even it has disappeared. All that remains are photographs of the headstone.

There have been, at times, lobbying to dig up the alien grave, and see what evidence may remain. But townsfolk have kept this from happening. What excitement would run through UFO circles if alien DNA was found there. Maybe it is best to leave the grave alone, and let the Aurora mystery remain.