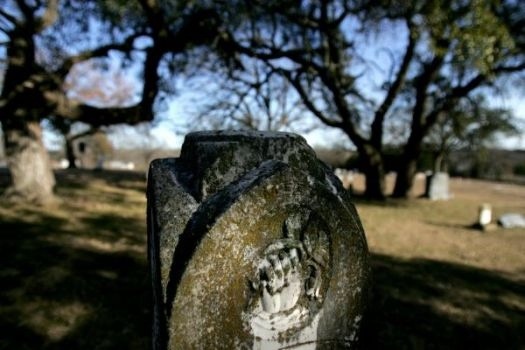 Aurora, Texas was Roswell before Roswell: a middle-of-nowhere town that suddenly became surrounded by legend when an alleged alien visitor crash-landed from outer space.

On this date in 1897 the alien UFO allegedly smashed into a windmill belonging to Judge J.S. Proctor. It’s pilot, who an officer from a local Army outpost described as a “Martian” and “not of this world” died and was buried in the cemetery nearby.

The reported crash was one of several American alien mysteries of the mid-1890s, but the most notable one (if not only) recorded in Texas.

Today, the only reminder of the visit, which occurred on this date in 1897, is a small historical marker near the Aurora Cemetery.

Buried deep in its stories of town founders and war heroes is a single line about the visitor supposedly buried in an unmarked grave there:

For many years, this community burial ground was known as Masonic Cemetery. Beauchamp, his wife Caroline (1829-1915), and others in their family. An epidemic which struck the village in 1891 added hundreds of graves to the plot. Called “Spotted Fever” by the settlers, the disease is now thought to be a form of meingitis. Located in Aurora Cemetery is the gravestone of the infant Nellie Burris (1891-1893) with its often-quoted epitaph: “As I was so soon done, I don’t know why I was begun.

This site is also well-known because of the legend that a spaceship crashed nearby in 1897 and the pilot, killed in the crash, was buried here. Struck by epidemic and crop failure and bypassed by the railroad, the original town of Aurora almost disappeared, but the cemetery remains in use with over 800 graves. Veterans of the Civil War, World Wars I and II, and the Korean and Vietnam conflicts are interred here.

In the 1970s, a group from the International UFO Bureau showed up to exhume the body

media in tow, they got turned away by angry residents.

The mystery lives on. 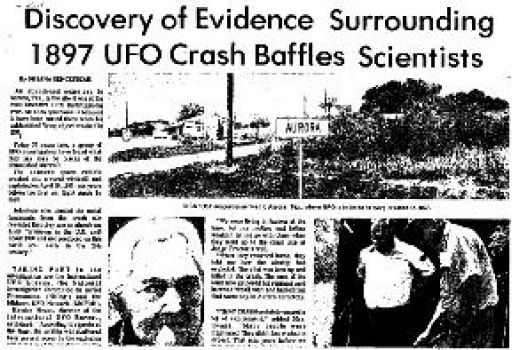