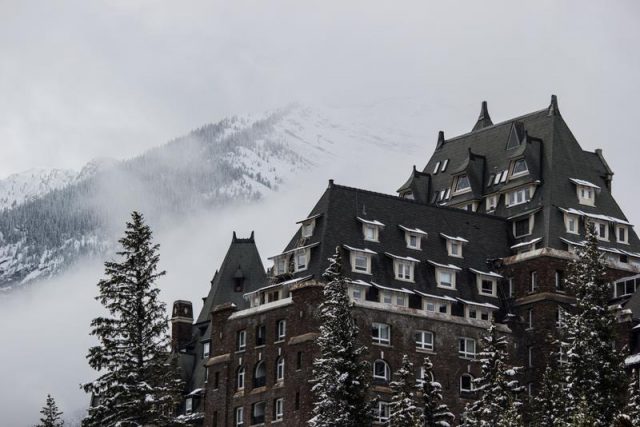 The Ghosts of Fairmont Banff Springs

This 129-year-old hotel has more than a few residents who’ve checked in but never checked out. Here are just a few…

Probably the most famous of all the spectres residing in the Fairmont Banff Springs, (she’s even featured on her own stamp and coin), the story of the Ghost Bride dates back to the late 1920s. The story goes that on the young couple’s wedding day, the bride, decked out in her wedding gown, descended one of the hotel’s marble staircases. Something startled her, causing her to slip and fall. Some say she caught her heel in the hem of her dress. Others say her dress brushed up against a candle’s flame. Whatever the cause, the end result is the bride died on those steps.

Since then, hotel staff and guests alike have reported seeing a veiled figure moving up and down the stairs, or seeing a figure in a wedding dress dancing in the ballroom upstairs, pining for the first dance with her husband that she never had.

Stories of Sam McCAuley, a genial old Scotsman who was head bellman during the sixties and seventies, have been circulating around the hotel since his passing in 1975. Supposedly, Sam is a helpful sort of spirit, and most stories involving him mention some service he’s provided to staff or guests. One incident involved two elderly women calling the bell desk for assistance after they found their key would not work. The regular bellman was occupied with other duties and didn’t respond for 15 minutes. By the time he arrived at their door, it was unlocked. One of the women said an older bellman in a plaid jacket, matching Sam’s description exactly, had helped them. Other stories including guests seeing Sam haunting his old office (now a guest room) on the mezzanine floor as well as seeing apparitions and feeling cold spots on the sixth, seventh or ninth floors of the hotel.

This is one room that staff say is hard to keep booked. Guests have reported having the pillows yanked out from under their heads while they slept or even being pushed off the bed by some unseen entity. Whatever spirits haunt this room, it’s safe to say that if they can’t rest in peace, they want to make sure you won’t either.

The legend of room 873 has a number of variations, but the gist of it is that an entire family was murdered there and ever since, guests in the room have reported being awakened by screaming. When they turned on the lights, they would see bloody hand prints on the mirror. Depending on who tells the story, the hand prints either disappeared before hotel staff had a chance to clean them or wouldn’t come off at all. In any case, if you visit the eighth floor where room 873 should be, you’ll find it’s been completely covered and is inaccessible from the hallway, keeping guests out of the supposedly haunted room.