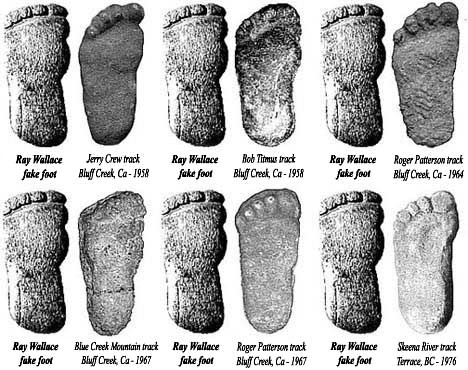 Some of the best evidence in support of sasquatch are the footprints they leave behind. However, people often believe sasquatch prints to be faked, or claim they are really made by a bear.

However, compelling evidence has been found that suggests some of these prints could be real!

Bigfoot tracks are the most recognizable evidence; of course, the animal’s very name came from the size of the footprints it leaves behind. Unlike sightings, they are physical evidence: something (known animal, Bigfoot, or man) left the tracks. The real question is what the tracks are evidence of. In many cases, the answer is clear: they are evidence of hoaxing.

Contrary to many Bigfoot enthusiasts’ claims, Bigfoot tracks are not particularly consistent and show a wide range of variation (Dennett 1996). Some tracks have toes that are aligned, others show splayed toes. Most alleged Bigfoot tracks have five toes, but some casts show creatures with two, three, four, or even six toes. Surely all these tracks can’t come from the same unknown creature, or even species of creatures.

Not all prints found are footprints, though. In September 2000, a team of investigators from the Bigfoot Field Research Organization led an expedition near Mt. Adams in Washington state, finding the first Bigfoot “body print,” which-if authentic-is arguably the most significant find in the past two decades. The Bigfoot, according to the team, apparently made the impression when it laid on its side at the edge of a muddy bank and reached over to grab some bait.

This of course raises the question as to why the animal would make such an odd approach to the food, instead of simply walking over to it and taking it. As the log of the expedition reads, “One explanation is immediately apparent-the animal did not want to leave tracks. . . .” (BFRO 2000).

This explanation fails on its own logic: If the Bigfoot (or whatever it was) was so concerned about not leaving traces of its presence, why did it then leave a huge fifteen-square-foot imprint in the mud for the team to find?