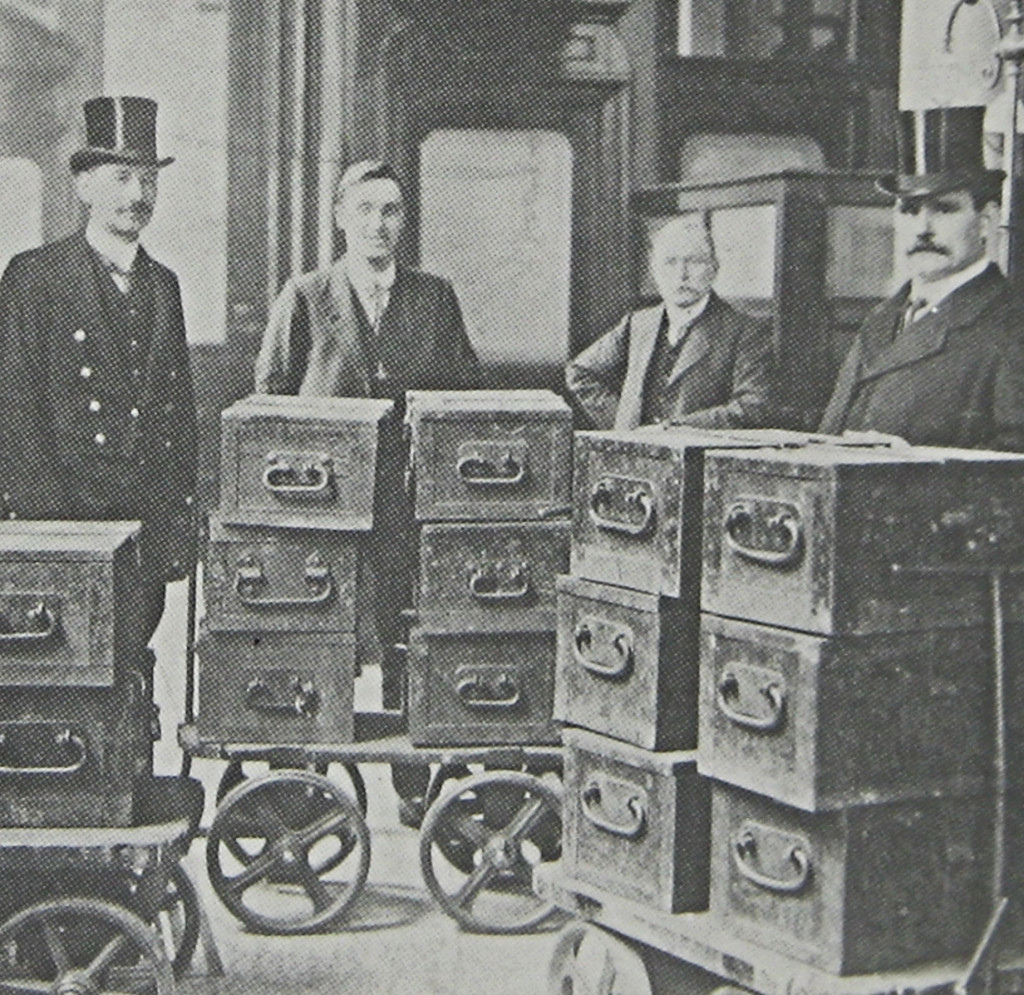 The “Croydon Aerodrome Gold Robbery”, also known as “The Imperial Airways Gold Heist” was the theft of just over 20kg of gold bullion, made up of gold bars, gold Sovereigns and gold American Eagles from South London’s Croydon Aerodrome (Croydon Airport) on the 6th of March 1935. It was customary to only have one security guard on duty who held the key to the security room for all incoming cargo flights. Three men had managed to get their hands on a set of keys and they were able to simply walk into the airport unabated and steal over £21,000 worth of gold from right under the security guards nose.

Three men were charged with the theft of the gold bullion (now worth £742,000 in today’s money). Only one of the men was convicted and sentenced to seven years in prison, whilst the other two men were acquitted after a key witness changed their testimony. The gold was never found and the remaining gang members weren’t identified.

On April 28th, 2019, a homeowner in the Cramahe Township, Northumberland County, Canada, reported over 22kg of gold bullion missing from their home. The gold was made up of five-ounce gold bars, one-ounce wafers and gold coins manufactured by The Royal Canadian Mint. There was no forced entry into the home and nothing else in the building had been disturbed. There were “no real identifiers” on the gold bars and their disappearance is a complete mystery.

On the 29th of September, 2016, Julio Nivelo reached viral fame after pulling off the simplest gold heist in living memory. On a busy Manhattan street corner, he walked right up to an open armored vehicle and snatched a 19-liter bucket of the back of the truck. It wasn’t until hours later in his bedroom in New Jersey, that Nivelo realized what he’d stolen: more than $1.6 million in gold.

After trading a lot of the gold flakes for cash, Nivelo had about $1.2 million and once he’d stashed some of the cash, gave $200k to his fiance, Nivelo snuck into Mexico, through latin America and finally made it home to Ecuador. After thinking he was in the clear, The local authorities caught up with him after about a month of being back. They refused extradition to the states and instead sent him to prison in Ecuador for nine months.

After starting work at the San Francisco Mint in 1898, By 1901, Walter Dimmick was trusted with the keys to the vaults until an audit showed that over $30,000 of gold Double Eagles were missing. The six bags of gold bullion coins weighed over 44kg in solid gold and would have a value of over $2.14m in today’s money. Although there wasn’t any hard evidence, the main suspect was Walter Dimmick and he was found guilty and sentenced to nine years in prison. Still to this day, the mystery lives on and the coins were never found.

Armed robbers stole more than $2.5m worth of gold coins from a vault that had been left open at a mint in Mexico City. The brazen thieves left with more than 1500 gold centenarios. Two people, one wielding a firearm broke into the Mexican mint, throwing a security guard to the floor. The other robber went to the vault which was wide open and filled his backpack with 1567 gold.

The “centenarios”, have a face value of 50 pesos, but traded for 31,500 pesos ($1,610) apiece at the time of the robbery and have a total weight of 44 kg of pure gold. The same Casa de Moneda branch was also broken into in 2018 while the building was being renovated, but the heist was not as successful.

On a fall morning in October 12, 2012, George Villegas leaves his apartment with two wheeled suitcases, packed with hundreds of gold nuggets sealed in plastic bags, each weighing more than 50 pounds. Working as a courier for his cousin’s Bolivian gold mining company, Quri Wasi Inc., George is to deliver the gold to a refinery in Opa-locka.

Villegas enters a cramped elevator in his apartment building to be greeted on the first floor by Cuban gangster, Raonel Valdez waving a gun in his direction saying “We want the gold,” in Spanish. “We’re only here for the gold.” Villegas tries to wrestle the firearm from Valdez, but Valdez squeezes the trigger and the gun jams. Valdez knocks him down and snatches the suitcases with over 45kg of gold nuggets, worth over $2.8m dollars.

Raonel Valdez-Valhuerdis, 34, was captured while crawling through bushes near the Guatemala-Belize border. Leading up to the trial, George Villegas died of a heart attack and couldn’t testify against Valdez in the case. However, in January 2017 justice was served and Valdez was sentenced to 10 years in prison.

On 22 June, 1982, three men duped the Perth Mint in Western Australia to hand over 49 gold bars weighing 68kg and that time valued at $653,000 (2019: $3.3m). According to police at the time, three brothers, Brian, Ray and Peter Mickelberg, orchestrated the swindle. The brothers supposedly stole cheques from a Perth building society and then tricked the mint into accepting those cheques in exchange for the gold bullion. The gold was picked up by a security company who delivered it to an office in Perth and then to Jandakot Airport, where the gold bullion seemingly disappeared.

The three brothers went to trial in 1983 and were found guilty and sentenced to twenty, sixteen and twelve years in jail. All three convictions were overturned in 2004 and the case currently remains unsolved and continues to be fought by the Mickelbergs who maintain their innocence. In 1989, 55kg of gold nuggets were found outside the gates of TVW-7, a Perth television station, with an anonymous note addressed to Alison Fan – one of the stations reporters. The note was protesting the brothers innocence and claimed that a prominent Perth businessman was behind the swindle.

The strange story of the 1973 Sveriges Kreditbanken Bank Heist