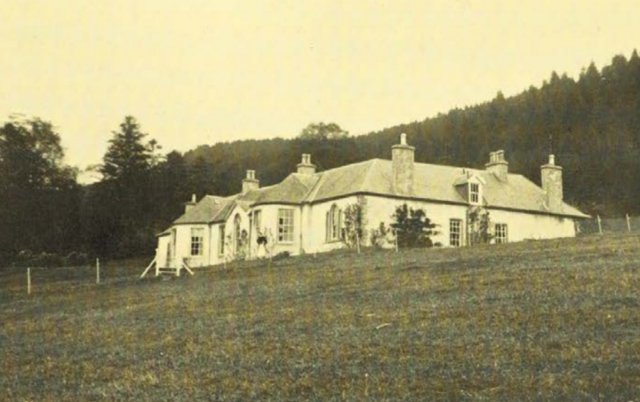 Boleskine House is a manor on the south-east side of Loch Ness in the Scottish Highlands. It is notable for having been the home of author and occultist Aleister Crowley, and Led Zeppelin guitarist and producer Jimmy Page.

Aleister Crowley is one of the most infamous figures in British history. During his early twentieth century heyday the occultist and seeker after esoteric truths was dubbed “the most evil man in Britain” by the popular press, denounced as a Satanist and black magician.

Throughout his adult life, Crowley was fascinated by magic. At one point he came into possession of a book called “Book of the Sacred Magic of Abramelin the Mage,” written in the Middle Ages by someone calling himself Abraham the Jew. According to the book, each person had a Holy Guardian Angel assigned to them at birth and the text provided instructions on how this spirit could be contacted. Once the sequence of ceremonies, known as the Abramelin operation, had been performed successfully, the Angel would impart magical wisdom to its invoker, so it was said.

The method described in the book involved a long process of ritual and meditation which was to continue for many months. Location was crucial, said the author. Crowley was determined to complete the ritual and scoured the face of Britain looking for the ideal place. At last, he thought he had found it in Boleskine House, located near Inverness in Scotland, on the shores of Loch Ness. He bought the building, an eighteenth century mansion, in 1899. Crowley later said he had picked Boleskine “for its loneliness” and that it was “already the centre of a thousand legends.” Rumours ran that it had been built on the site of a church where the congregation had once burned to death while attending Mass. No doubt this thought appealed to Crowley who had rebelled against a strict Christian upbringing.

Stories of strange goings-on during Crowley’s residence at Boleskine House are legion. There are tales of people dying or mysteriously disappearing, even of a butcher who chopped his own hand off after receiving a meat order from Crowley which had been inadvertently scrawled on the back of a piece of paper containing a spell. Part of the Abramelin ritual involves summoning a number of demons and subduing them. Crowley believed some of these demons had run amok locally, “terrifying the natives.” The local people learned to steer clear of Boleskine, taking lengthy detours in order to avoid it.

Crowley founded a religion, or system of magic, depending on your perspective, known as Thelema. The central tenet of Thelema is embodied in Crowley’s dictum “Do What Thou Wilt Shall Be the Whole of the Law.” Though it is not well known, there are still practitioners of Thelema in the world today. They regard Crowley as the Father of their faith and Boleskine House as the kiblah, or focal point, of the faith’s magical energies. The building has something of the same significance to Thelemites that Mecca has to Muslims.

Crowley eventually sold Boleskine House, though it has retained its spiritual significance to practitioners of the Thelemic faith. After his departure, the building fell into decay, though in the 1970s it was bought and restored by the legendary Led Zeppelin guitarist and reputed Crowley obsessive, Jimmy Page. Boleskine House even featured in the Led Zeppelin video The Song Remains the Same.

In the 1990s, the building was sold again. It is now a private residence and its owner continually complains of having to fend of the legions of Crowley devotees who regularly turn up on his doorstep.