The birth of a haunted village

Bramshott is an old English hamlet, just north of Liphook, which sits almost half way along an on an old stage coach road that leads from London to Portsmouth.

Bramshott, it’s Manor House, Chiltlee Manor and two other manors are described in the Domesday Book in 1086.

Chiltlee Manor and “all land” which lay to the south of Bramshott Manor was recorded as being held by the king, William the Conqueror according to the Domesday Book.

The much used road from London to Portsmouth made Bramshott the ideal stopping point for the wagons and riders that made the long journey. Travellers were catered for by stalls, eventually replaced by half-timbered stores and an inn that appeared around the square.

The village grew quickly because of its location and connection to the throne until the 14th century, but was then devastated by the Black Death. The Black Death and subsequent rising taxes placed on Bramshott folk by the throne, resulted in the few remaining dwellers moving to the nearby village of Liphook.

The “big oak tree” by Bramshott church, which was in the middle of the road, was used for hangings in the 14th Century following the Black Death.

Population growth in Bramshott boomed again when the old wagons got replaced by stage coaches running the London to Portsmouth route. Bramshott as a coaching stop was firmly established by 1660.

The popularity of the stage coach stop soon attracted some on England’s most notorious highwaymen.

The legend of the Bramshott highwaymen’s inn

The original Bramshott Inn by the 1700’s was known as the ‘Seven Thorns’ and was trading well as a coaching inn. It was reputedly used by highwaymen who praied on the passing traffic heading from London to Portsmouth.

The ‘Seven Thorns’ soon had a reputation for being “rough” and “dangerous” and it is said many “villainous deals” were cooked up there.

Hundreds of robberies, attacks, horse thefts, and even murders happened in or around the Seven Thorns.

The first ghosts of Bramshott are said to have started to appear around this time as well. 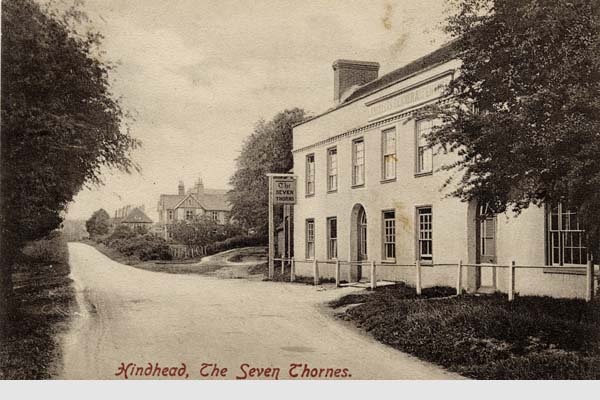 Bramshott is said to be the most haunted village in Hampshire, and possibly in the UK. The village has had numourous sightings and paranormal occurrences that have been documented. Many of these sightings continue to the day.

It is claimed to be haunted by at least 17 regular appearing ghosts, as well as many other strange apparitions that have been sighted over the years.

Boris Karloff used to live in Bramshott until his death. Karloff moved to the area apparently because of its history of paranormal activity. His house was said to be haunted by a tall dark figure and stories of unexplained noises in the house during the middle of the night.

It is also said the ghost of Karloff himself has been seen walking the nearby lanes.

The Old Bramshott Manor has a White Lady Ghost, that is said to be Lady Hole a former owner.

A ghost, named “Mistress Butler” who is said to have been so unhappy she drowned herself in 1745 whilst living in the manor – her ghost walks beside the river.

A “Grey Lady” who lingers beside a well outside the inn, where she is supposed to have plunged to her death a long time ago.

The inn also had the ghost of a pot boy who used to serve ale to the coaches that stopped there on the way to London, but was one night “butchered” by highway men in 1772.

“Flute Boy” This figure is seen and heard on the lanes, in trees and behind bushes in the village. The music he produces is described as enchanting, but with an underlying atmosphere of danger. He is often spotted in the same area as a ghost of a pale white calf.

The ghost of Highwayman Jacques. This robber was shot by lawmen in room six of the Anchor Hotel, and his spirit is said to remain, spooking guest and staff.

The “Boy Ghost” is supposed to be just that, the ghost of a young boy, who fell victim at the hands of the most feared gang of local highway men whilst he was tending to horses outside the inn around the 1800’s.

His ghost is now said to be a warning, and also seen just before the appearance of the inns most fearful apparition “the ghostly stagecoach” . This invisible, yet clearly audible procession of a horse and carriage being driven down the lane has been recorded on tape, and witnessed by hundreds of people.

The “Canadian solider” ghost, who was murdered by Georges Coders at Bramshott army camp in 1915. It was claimed both Coders and the solider had been driven insane by another ghost who tormented them on a nightly basis. 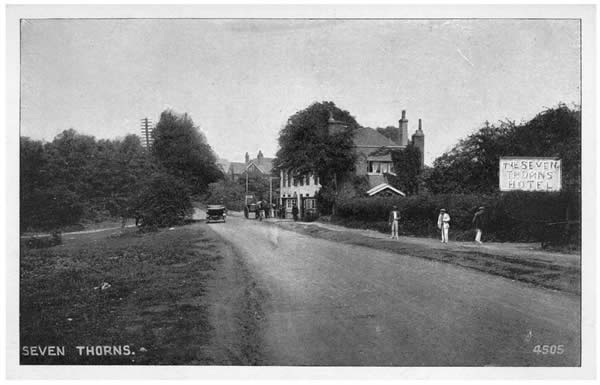 Just a few KM’s from Bramshott can be found the strange and mysterious Devils Punch, Local legend has a colourful theory as to its creation.

According to the legend, during the Middle Ages the Devil became so irritated by all the churches being built he dug the punch bowl to allow a gateway for ghouls to exit and torment the local parishes, including Bramshott.

The local church, St. Mary’s holds the graves of 318 Canadian soldiers stationed at the nearby Bramshott Camp during the First World War. These include many victims of the influenza outbreak of 1918-20. Reports of strange noises sounding like the screams of dying men and woman have become frequent – and now locals keep the cementary locked!