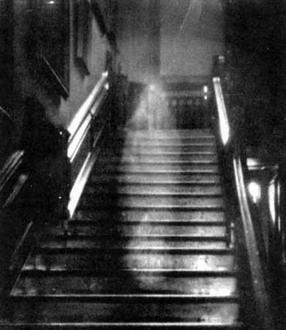 It is said that Lady Townsend’s husband, Charles Townsend, suspected his wife of being unfaithful and even though she is listed as having been buried in 1725 many people think that her death and funeral were faked. Instead, Lady Townsend was locked away in a remote part of the house until she passed away in 1726 from smallpox never allowing her to even see her children. Ever since then she is thought to be haunting Raynham Hall.

Raynham Hall is a country house in Norfolk, England. For nearly 400 years it has been the seat of the Townsend family.

The first recorded sighting of the ghost was made at a gathering at Raynham Hall at Christmas in 1835.

The next sighting of the “Brown Lady” was made in 1836 by Captain Frederick Marryat a friend of novelist Charles Dickens.

On September 19, 1936, two London-based photographers working for Country Life magazine were taking photographs of the staircase at Raynham Hall for an article to appear later in the year. The story goes that after taking one photograph one of the photographers looked up and saw a vapory image and quickly took another photograph. Later, when the negative was developed, the famous image of the “Brown Lady” was revealed. That image was published on December 26, 1936.

Questions over its authenticity arose. Experts called in by Country Life stated that the photograph and its negative did not appear to have been interfered with.

Since then, however, some critics have claimed that one of the photographers faked the image by painting grease or a similar substance on the lens in the shape of a figure, or by him deliberately moving down the stairs during an exposure. Others claim that the image is an accidental double exposure or that light somehow got into the camera. After this last sighting in 1936, the Brown Lady has not been seen since.

The actual death date 1726, the second sighting 1836 and the third sighting 1926 are 100 years apart. The first sighting Christmas 1835 and the date the photo was published December 26, 1936 is 100 years apart. Is the Brown Lady going to make another appearance by 2036?  To see if she is going to come back; everyone should mark their calendar so that we can talk again on that date.