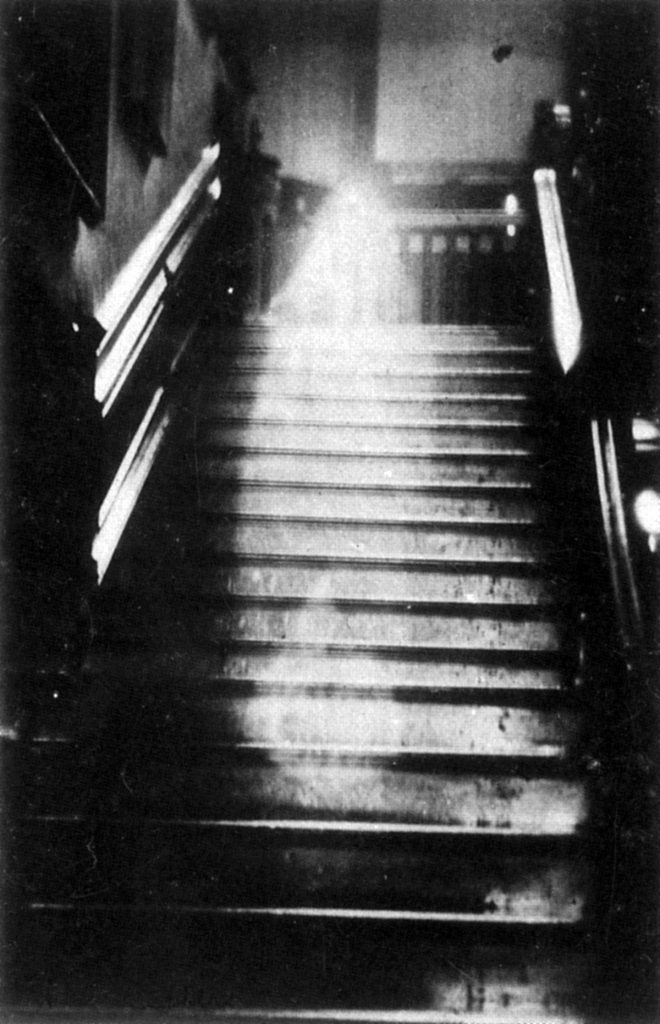 This picture captures one of the most famous ghosts in Great Britain, the Brown Lady of Raynham Hall. Or does it?

It has been said the Brown Lady haunts Raynham Hall in Norfolk, England. She is supposedly the ghost of Lady Dorothy Walpole (1686-1726), sister of Robert Walpole, who is regarded as Britain’s first Prime Minister.

The image was taken by Captain Hubert C Provand, a London-based photographer working for Country Life magazine, and his assistant, Indre Shira. They were taking photographs of Raynham Hall for an article, and had just taken a shot of the Hall’s main staircase.

Allegedly, Shira saw “a vapoury form gradually assuming the appearance of a woman” coming down the stairs, and the duo snapped a picture under his instruction. The later negative showed the ‘Brown Lady’, which was published in Country Life in 1936, along with Shira and Provand’s written account of events.

Critics claimed Shira put a greasy substance on the lens to create the figure, or moved down the stairs during an exposure. There is also a theory of double exposure upon detailed examination, as well as one picture being superimposed over the other due to a patch of reflected light at the top of the right hand banister appearing twice.

The magician John Booth said the ‘Brown Lady’ could be duplicated by natural methods. By covering fellow magician Ron Wilson with a bed sheet – like a last minute Halloween costume – and instructing him to walk down a staircase, the faked image looked very similar to the Lady.

It is also said the ‘Brown Lady’ closely resembles a standard Virgin Mary statue that is found in a Catholic church.

The public were bamboozled by cheap camera trickery. Good effort, though.