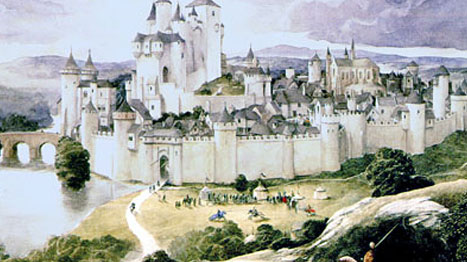 The oldest known documents about King Arthur contain no information about Camelot. The place isn’t mentioned at all until the twelfth century, when a French poet named Chretien de Troyes mentioned it by name in one of his poems about Lancelot.

Later, in 1485, it’s mentioned in the tale by Sir Thomas Malory “Le Morte D’Arthur” that the round table is located in the great hall at Winchester.

There has also been speculation that the word Camelot comes from the Latin word “Camulodunum”. Camulodunum is the oldest settlement in England, according to the Romans. This settlement became a large fort when Roman legions invaded England. It was located in what is modern day Essex. Prior to Roman invasion, it was the home of many Celtic tribes.

Another interesting theory is that Camelot could be associated with the River Camel in Cornwall. It was mentioned in some Arthurian legends that he was born in Tintagel Castle in Cornwall. Could there have once been a great kingdom nearby?

Perhaps our greatest clue came in 1542, when a man named John Leland traveled around England collecting information about England’s history. He wrote about an “town or castle” called Camallate that sat on a hill south of South Cadbury Church. The nearby villagers told him that Arthur used to visit this “Camallate”. “At the top of the hill,” he wrote, “there is a great area of 20 acres, wherein diverse places foundations of walls can still be seen. There was a lot of blue stone which the people of the village have used again and taken away.”

Could the remains of this “castle or town” be that of the Camelot mentioned in Arthurian legends? Or could it have been nothing more than the villagers’ folklore? Whatever the case may be, this area is located in modern day Somerset.

Whether Camelot was located in Winchester, Essex, Cornwall, Somerset, or elsewhere in the British Isles, we’ll probably never know. It’s always possible that Camelot never existed at all, although trying to pinpoint the exact place wherein its origins are based is pretty fascinating. In the end, Camelot joins Avalon and Lyonesse as other long lost places from Arthurian legends.