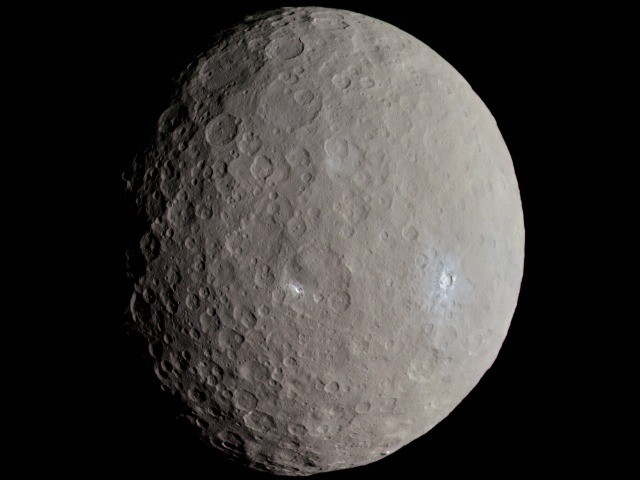 The bright spots were first identified by the Dawn spacecraft on Ceres, the largest object in the asteroid belt between Mars and Jupiter, in 2015, but only recently have researchers realised that they’re changing over time. According to the Tech Times, some believe that the effect is caused by sunlight falling on to ice patches, which are then turning the ice into vapour. Astronomers who have been monitoring the planet, however, say that the changes in the spots do not correlate with the dwarf planet’s day and night cycle, deeming this theory questionable.

Another theory is that the spots are just epsom salt, or hydrated magnesium sulfates.

“As soon as the Dawn spacecraft revealed the mysterious bright spots on the surface of Ceres, I immediately thought of the possible measurable effects from Earth. As Ceres rotates the spots approach the Earth and then recede again, which affects the spectrum of the reflected sunlight arriving at Earth,” said the author of the study, Paolo Molaro.

The observation team watched Ceres for two nights last summer using the HARPS telescope in La Silla. “The result was a surprise” said Antonino Lanza, co-author of the study. “We did find the expected changes to the spectrum from the rotation of Ceres, but with considerable other variations from night to night.”