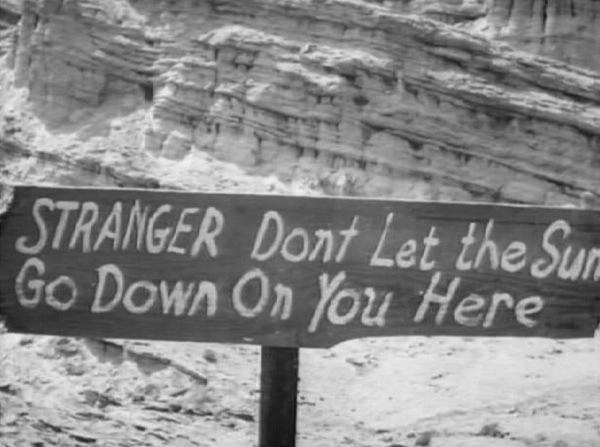 The twin cities of Texarkana, Texas, and Texarkana, Arkansas, have only had one reported case of serial murder, and it was a case that gripped the region in fear for several months in 1946.

The attacks came at night on the weekends, roughly every few weekends for that period; in total, five people were killed and three more injured. The case so captured the public imagination that thirty years later, it inspired the horror film The Town That Dreaded Sundown.

Only the first victims, Mary Jeanne Larey and Jimmy Hollis, were able to give a description of their attacker—and it was more terrifying than it was helpful.

They described a six-foot-tall man with a plain white sack over his head, which had holes cut out for the eyes and mouth. It isn’t known whether or not the killer wore this mask during the other attacks; the only other survivor didn’t get a look. The killer used a .32 caliber pistol, nearly always killed three weeks apart, and always carried out his murders in the dead of night.

After one of the murders, Sheriff William Presley exclaimed to the press, “This killer is the luckiest person I have ever known. No one sees him, hears him in time, or can identify him in any way.” This led the press to dub him the Phantom Killer, and the killings themselves have become known as the Texarkana Moonlight Murders.

One suspect, Youell Swinney, was imprisoned as a repeat car theft offender in 1947 and released in 1973; he was never charged with the crimes. Though some in law enforcement and the press have speculated that the murders may have been the early work of the Zodiac Killer, this has never been proven in any way. 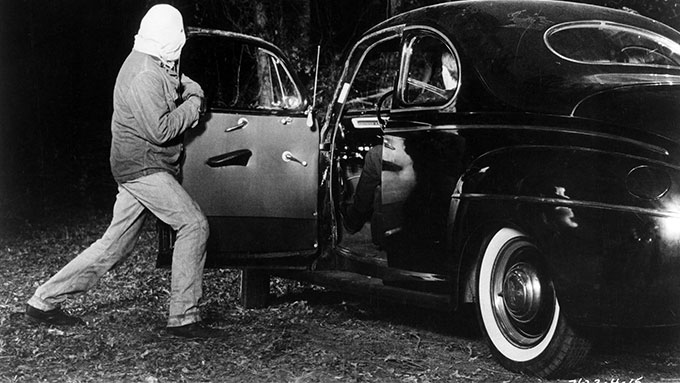 The first reported attack of the Phantom killer occurred at around 11:55 p.m. on February 22, 1946. Jimmy Hollis, 25, and his girlfriend, Mary Jeanne Larey, 19, parked on a secluded road which was known as a lover’s lane after having seen a movie together. A man wearing a white cloth mask with eye holes cut out (described later as a “bag” by Larey), and handling a flashlight approached their vehicle by the driver side and ordered them both out of the car. Subsequently, he ordered Hollis to take off his pants and pistol-whipped him twice, rendering him unconscious. Mary Jeanne was also hit, and was then ordered by the assailant to run up the road. After reaching an old car parked off the road, she was again confronted by her attacker whom, strangely enough, asked her why she was running, to which she replied he had ordered her to. Calling her a liar, the aggressor knocked her out and sexually assaulted her with the barrel of his gun. After the assault, Larey fled on foot and was eventually able to call in the police, while Hollis regained consciousness and was seen by a passer-by. Bowie County Sheriff W. H. “Bill” Presley and three other officers arrived on the scene. They found Hollis pants 100 yards away from the parked car. Later, both Jimmy and Mary Jeanne gave contradicting statements regarding their attacker’s lookings, with Hollis claiming he was a white man in his 30’s, while Larey described the man as being a light-skinned African-American, and added a detail: the mask that covered his face had also a mouth hole.

Almost a month later, on March 23-24, the first double murder occurred. Richard L. Griffin, 29, and his girlfriend, Polly Ann Moore, 17, were found dead in Griffin’s sedan, between 8:30 a.m. and 9:00 a.m., by a passing motorist. The car was found on another lover’s lane named Rich Road, close to a local bar named Club Dallas. They were both shot once in the head, while outside the car, then placed back inside. A .32 cartridge shell was found, possibly shot from a Colt. The police launched a citywide investigation along with other sheriff’s departments in the vicinity and the FBI. The authorities interviewed around fifty to sixty witnesses, and posted a reward in an effort to gain new information on the case (which in turn produced more than a hundred false leads).

On April 14, another double murder occurred. The victims were Betty Jo Booker, 15, a saxophone player, and her friend Paul Martin, 16. They were both found within three miles from Martin’s Ford coupe, which was parked outside Spring Lake Park, with the keys still in it. Paul’s body (found at around 6:30 a.m.) was lying by the northern edge of North Park Road, he was shot four times: once through the nose, again through his ribs, a third time in his right hand and finally through the back of the neck. Betty, whom was found five hours later than Paul, was lying behind a tree, clothed and with her right hand inside one of her pockets. She was shot twice: once through the chest and once in the face. The weapon used was the same of the first double murder, a .32 automatic Colt pistol. Sheriff Presley and Texas Ranger Captain Manuel Gonzaullas said that examinations of the bodies indicated they both had put up a struggle. Betty’s saxophone was eventually recovered six months later, near the spot where her body was found. A reward was again posted by the authorities, and rumors circulated regarding the apprehension of the murderer, which were later denied by Captain Gonzaullas. This further attack made the press nickname the murderer as the “Phantom Killer”.

On May 3, sometime before 9 p.m., Virgil Starks, 37, a farmer and welder, and his wife, Katie, 36, were attacked in their house. Virgil was shot dead from a closed window, while reading a copy of the Texarkana Gazette. Katie was shot twice from the same window, while trying to contact the police after witnessing her husband’s death. As the killer was approaching her, she ran to her neighbors house, and was brought to Michael Meagher Hospital. Mrs. Starks survived the attack and, while in the operating room of the hospital, she was questioned on the event by Miller County Sheriff W. E. Davis. A flashlight without fingerprints was left by the killer underneath the window that Mr. Starks was shot from. Although the weapon, in this case, was believed to be a .22 caliber automatic rifle, the absence of an apparent motive led the investigators to link even this murder to the Phantom Killer. As the peak of the town’s hysteria was reached, inquiries were implemented, rewards were increased and new ones were posted by the authorities and by the father of Virgil Starks. By November 1948, authorities no longer considered the Starks murder connected with the other double murders.

The consternation and panic caused by the murders lasted throughout the summer, eventually fading away three months later. The Texas Rangers left Texarkana in October without letting anyone know, in order to keep the killer from attempting another attack. In May 1946, a man was found on the Kansas City Southern Railway tracks north of Texarkana, near Ogden, Arkansas, lying face-down. It was later discovered the man was allegedly killed, with a sharp object, before being placed on the tracks. Earl McSpadden, the man, was widely believed to be either the Phantom whom finally committed suicide, or the latter’s final victim. No other crime occurred in Texarkana was ever linked to the Phantom Killer.

There is some speculation that the Phantom Killer and The Zodiac Killer are the same killer, as they are both very similar – Both were serial killers who were of mixed classification, mainly killed by shooting, attacked couples in secluded places (mainly during the night), on at least one occasion wore a mask, and they also killed a lone victim who was older than those whom characterized their classic M.O. once