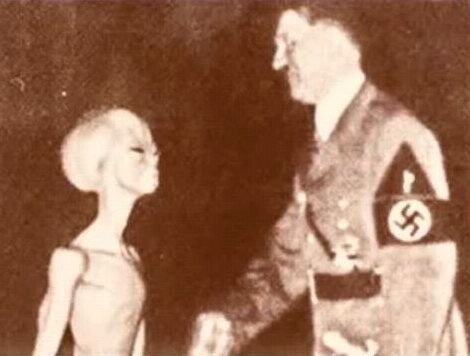 Rumours have existed since the end of the Second World War that Hitler had either developed flying saucers, or had reverse engineered alien saucers that the Nazi’s had captured.

Now recent evidence point to an even more sinister event, that Hitler met with alien visitors on a number of occasions.

When Adolf Hitler spread his message of hatred, genocide, and oppression, as having been inspired by a blond race of superhuman warriors referred to as Aryans, it is assumed through historical accounts that this was simply the contrived mythology of a madman.

These same accounts omit representation that Adolf Hilter was a member of demonic UFO cult worshipping cabals, and was an apparent UFO contactee, by the same Extraterrestrial group which Hilter sought to glorify.

The Nazis themselves claimed that an extraterrestrial society was the source of their ideology and the power behind their organization. Nazi mysticism, indeed, was reportedly a direct product of cult worship to Manipulative Extraterrestrials.

The Nazis referred to their hidden extraterrestrial masters as underground supermen. Hitler believed in the supermen and claimed that he had once met one of them, as did other members of the Thule leadership.

Some reports also allege that Adolf Hitler escaped capture by the U.S. and its Allies with the assistance of Manipulative Extraterrestrials.

The evidence he escaped Berlin

Hitler did not really commit suicide as some official historical accounts have suggested.

In 1952, Dwight D. Eisenhower said: “We have been unable to unearth one bit of tangible evidence of Hitler’s death. Many people believe that Hitler escaped from Berlin.”

When President Truman asked Joseph Stalin at the Potsdam conference in 1945 whether or not Hitler was dead, Stalin replied bluntly, ‘No.’ Stalin’s top army officer, Marshall Gregory Zhukov, whose troops were the ones to occupy Berlin, flatly stated after a long thorough investigation in 1945: “We have found no corpse that could be Hitler’s.”

The chief of the U.S. trial counsel at Nuremberg, Thomas J. Dodd, said: “No one can say he is dead.” Major General Floyd Parks, who was commanding general of the U.S. sector in Berlin, stated for publication that he had been present when Marshall Zhukov described his entrance to Berlin, and Zhukov stated he believed Hitler might have escaped.

Lt. Gen. Bedell Smith, Chief of Staff to Gen. Eisenhower in the European invasion and later Director of the CIA, stated publicly on Oct. 12, 1945, “No human being can say conclusively that Hitler is dead.”

Col. W. J. Heimlich, former Chief, United States Intelligence, at Berlin, stated for publication that he was in charge of determining what had happened to Hitler and after a thorough investigation his report was: “There was no evidence beyond that of hearsay to support the theory of Hitler’s suicide.” He also stated, “On the basis of present evidence, no insurance company in America would pay a claim on Adolph Hitler.”

An article in November, 1949, says “The Nazis went underground, May 16, 1943!” and details an alleged meeting at the residence of Krupp von Bohlen-Halbach, the head of I. G. Farben and agents said that in the aftermath of World War II, Nazis gone underground were planning for “for World War III.”

Another article in August, 1952, entitled “Hitler Did Not Die,” subtitled “Adolph Hitler’s fake suicide in his Berlin Bunker now is exposed as History’s greatest hoax! Positive evidence comes to light that Hitler did not die — here’s new evidence that Hitler is alive, directing the Nazi underground, today!”

On a Canadian Broadcasting Corporation program called “As It Happens,” September 17th, 1974 at 7:15 p.m., a Prof. Dr. Ryder Saguenay, oral surgeon from the Dental Faculty of the University of California at Los Angeles, said that Hitler had ordered a special plane to leave from Berlin with all medical and dental records, especially X-rays, of all top Nazis for an unknown destination. He said that the dental records used to identify Hitler’s body were drawn from MEMORY by a dental assistant, who reportedly disappeared and was never found.