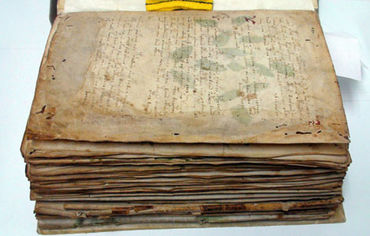 Documentary – The book no one can read

Inside the Beinecke Rare Book and Manuscript Library at Yale University is the Voynich manuscript: a book that has come to be known as “the world’s most mysterious manuscript.” Since a team of scientists has recently determined the age of the Voynich (pronounced Voy-nitch) manuscript, we relish the opportunity to discuss this enigma as well as some wonderful words around cryptography and linguistics.
Consisting of 240 pages of detailed illustrations and a cipher (a method of secret writing using substitution or transposition of letters according to a key), the book has a unique and notorious quality. For decades, historians and scientists have studied its ancient pages but have been unable to decipher its text. Who wrote this manuscript and why? Is there a hidden message within the pages of this document?

A book dealer named Wilfrid M. Voynich discovered the manuscript outside of Rome in 1912, and it has been in the news because of the work of scientists at the University of Arizona. Using a technique called radiocarbon dating, the team of researchers concluded that the book was probably composed between 1404 and 1438 – earlier than previously thought. The detailed illustrations of specific dress, hairstyles and landscapes as well as the “letter-based cipher” theory help to identify the region of origin as European. The manuscript is written on vellum (animal skin); this enabled scientists to accurately date the manuscript.
The text within the manuscript consists of over 170,000 glyphs, some resembling Latin text. These pictographs or characters, written with one or two simple pen strokes, outline six sections: Herbal, Astronomical, Biological, Cosmological, Pharmaceutical and Recipes. Each section contains an illustration depicting the subject and within each section there seems to be an alphabet consisting of 20-30 distinct glyphs that repeat. However, there are about twenty-four isolated characters that occur only once or twice throughout the manuscript.
Many scientists and historians believe that the manuscript was meant to act as a pharmacopoeia – a handbook for early modern medicine. If this is true, perhaps once accurately deciphered, the manuscript will help navigate scientists toward uncharted medical territory.
Some theorize the text is idioglossia, a private language that only one or two people could ever decipher. The oddness of the characters suggests at the very least an argot, “a specialized idiomatic vocabulary peculiar to a particular class or group of people, devised for private communication.”
And who wrote the manuscript? Some theorists believe Voynich himself was the author. If that is the case, the manuscript is not only one of the greatest cons in literary history but a work of linguistic genius in its own right