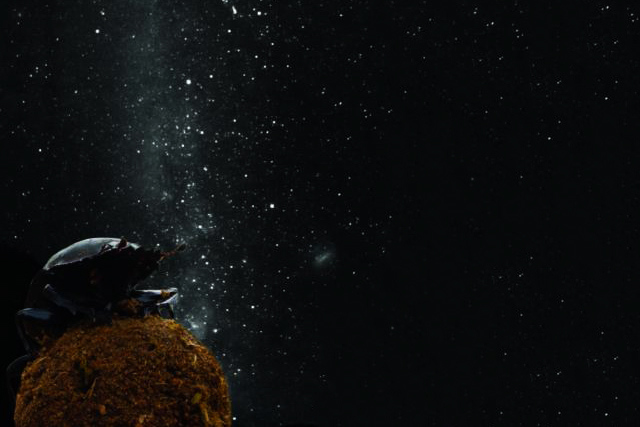 “Even on clear moonless nights, many

Considering that birds, seals and butterflies are known to rely on the stars to find their way around, the study authors noted that using the Milky Way as a compass “might turn out to be widespread in the animal kingdom.”

If any bug needs a straight line to follow, it’s the dung beetle. These nocturnal insects make a habit of balling up pieces of animal manure and rolling the spheres away from the larger pile to save for their own use. The balls, which are considerably bigger than the beetles’ bodies, serve as food and even a nesting place for some species.

Given the importance of these dung balls, it’s essential that the beetles keep them away from any would-be thieves. Hence the importance of rolling in a straight line: If they take a curvy route, they could mistakenly wind up back where they started, giving other beetles a chance to steal it.

“The whole point of moving the ball away is to avoid the competition,” said Keith Philips, a dung beetle expert at Western Kentucky University in Bowling Green, who wasn’t involved in the new study. “Stop wasting energy moving your ball around.”

Vision scientist Marie Dacke of Lund University in Sweden, who led the study, had noticed in previous studies that even on moonless nights, dung beetles were able to move their spheres in straight paths. To put the critters’ routing skills to the test, she and her colleagues tracked their insect subjects through a dung-rolling course on a South African game reserve called Stonehenge.

The researchers put the beetles and their balls of dung in the center of an arena of sand surrounded by a meter-high wall so nothing on the ground could be used as a point of reference. An overhead camera filmed their paths.

The beetles’ performance was telling. On clear nights when the moon and stars were visible, the insects’ trajectories were more or less straight. Even on a moonless night, the beetles were pretty efficient in their dung-rolling as long as the Milky Way was visible. But when the sky was overcast, the insects went every which way but straight.

In a second round of experiments, the researchers put the bugs and their dung balls in the center of a wooden platform two meters across and clocked how long it took for them to reach the edge. With the galaxy in sight, their paths led them to the edge of the platform in as little as 40 seconds. But with clouds blocking their view, it took them nearly two minutes. 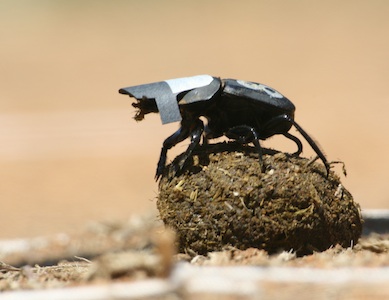 The researchers even taped makeshift cardboard visors to the beetles’ heads, blocking their view of the sky to eliminate all doubt. To no one’s surprise, the beetles wandered aimlessly, showing no sense of direction.

Dacke and her colleagues found that dung beetles can transport their dung balls along straight paths under a starlit sky, but lose the ability under overcast conditions. In a planetarium, the beetles stayed on track equally well under a full starlit sky and one showing only the diffuse streak of the Milky Way.

That makes sense, the researchers explained, because the night sky is sprinkled with stars, but the vast majority of those stars should be too dim for the beetles’ tiny compound eyes to see.

The findings raise the possibility that other nocturnal insects also use stars to guide them at night. On the other hand, dung beetles are pretty special. Upon locating a suitable dung pile, ball-rolling dung beetles shape a piece of dung into a ball and roll it away in a straight line. That behaviour guarantees them that they will not return to the dung pile, where they risk having their ball stolen by other beetles.

“Dung beetles are known to use celestial compass cues such as the sun, the moon and the pattern of polarised light formed around these light sources to roll their balls of dung along straight paths,” Dacke said. “Celestial compass cues dominate straight-line orientation in dung beetles so strongly that, to our knowledge, this is the only animal with a visual compass system that ignores the extra orientation precision that landmarks can offer.”