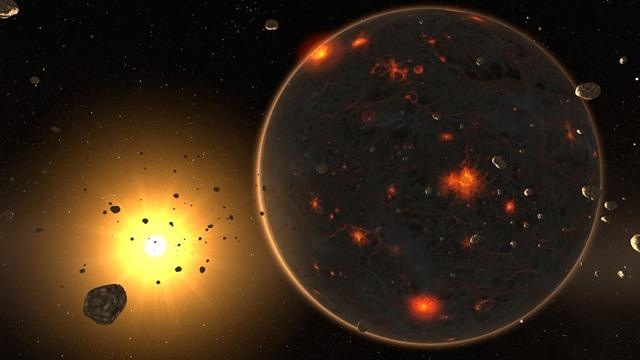 The Late Heavy Bombardment (commonly referred to as the lunar cataclysm, or LHB) is a hypothetical event around 4.1 to 3.8 billion years ago (Ga). During this event a very large number of the impact craters on the Moon would have formed, and by inference on Earth, Mercury, Venus and Mars as well. (While the LHB is “late” in the Solar System’s accretion period when Earth and the other rocky planets formed and gained most of their mass, it is early in Solar System history.) The evidence for this event comes primarily from the dating of lunar samples brought back by the Apollo astronauts, which indicates that most impact melt rocks formed in this rather narrow interval of time. While many hypotheses have been put forth to explain a spike in the flux of asteroids or comets in the inner Solar System at this time, no consensus yet exists as to its cause.

The Nice model, popular among planetary scientists, postulates that the gas giant planets underwent orbital migration and forced objects in the asteroid belt and/or Kuiper belt on eccentric orbits that put them in the path of the terrestrial planets. Nevertheless, some researchers argue that the lunar sample data do not require a cataclysmic cratering event near 3.9 Ga, and that the apparent clustering of impact melt ages near this time is an artifact of sampling material affected by a single large impact basin.

The record of this event is all but lost on the Earth because our planet’s tectonic plate system and active erosion ensure that the surface is constantly renewed.