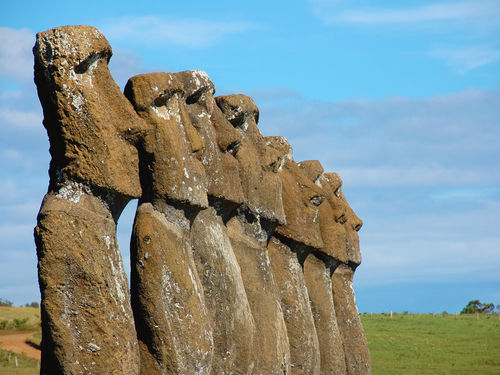 An amazing new discovery on Easter Island has unearhted bodies on the famous heads. Yes, some of the Easter Island statues actually have bodies to go along with their heads. For those who aren’t familiar with these statues, they “were carved out of distinctive, compressed, easily worked solidified volcanic ash or tuff found at a single site inside the extinct volcano Rano Raraku.”

The large stone statues, or moai, for which Easter Island is world-famous, were carved from 1100-1680 CE (rectified radio-carbon dates). A total of 887 monolithic stone statues have been inventoried on the island and in museum collections so far. Although often identified as “Easter Island heads”, the statues are actually torsos, with most of them ending at the top of the thighs, although a small number of them are complete, with the figures kneeling on bent knees with their hands over their stomachs. Some upright moai have become buried up to their necks by shifting soils.

The massive heads had been one of the biggest ancient mysteries ever discovered. The fact that they have bodies is astonishing!. Evidence of aliens is now being explored as a possible explanation of this discovery. 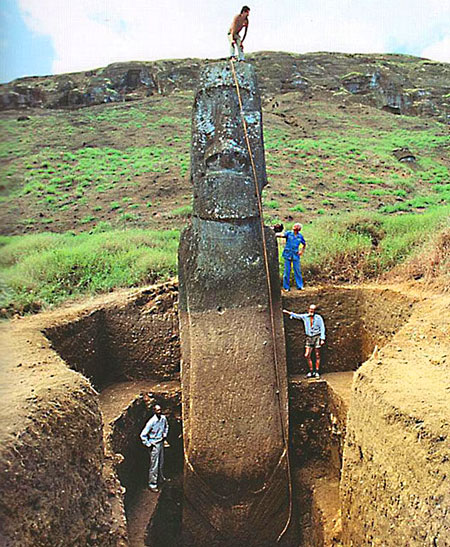 When most people think of the renowned monolithic statues, they think of the heads only. But in October 2011, the Easter Island Statue Project began its Season V expedition, revealing remarkable photos showing that the bodies of the statues go far deeper underground than just about anyone had imagined.

The excavations have also revealed new petroglyph writings on the bodies of the statues.  We are awaiting the transcripts for these writings. WIll they tell the story of ancient aliens creating the stones in the image of themselves ? 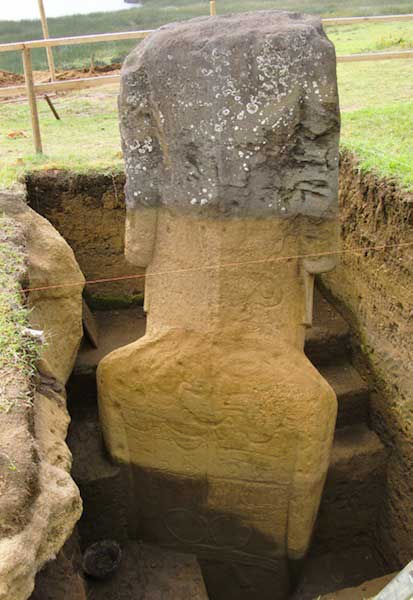