The enigmas surrounding the moai, Easter Island’s fleet of large stone figures, pretty much follow the same narrative as the other sites described here: How in the world did the Rapa Nui make these figures more than 1,000 years ago? And how did the moai end up on Easter Island?

Carved from stone, the nearly 900 human figures are sprinkled along the flanks of the island’s extinct volcanoes. The figures average 13 feet tall and weigh 14 tons and appear to have been chiseled from the soft volcanic tuff found in the Rano Raraku quarry. There, more than 400 statues are still in various states of construction, with some completed figures awaiting transportation to their intended resting place.

The reasons for carving the moai are mysterious, though they were likely sculpted for religious or ritual reasons. It’s also not exactly clear what happened to the stone-crafting Rapa Nui, but a leading theory suggests their civilization succumbed to an environmental disaster of their own making … which is something that probably could have been prevented had ancient aliens bestowed their infinite wisdom upon the culture 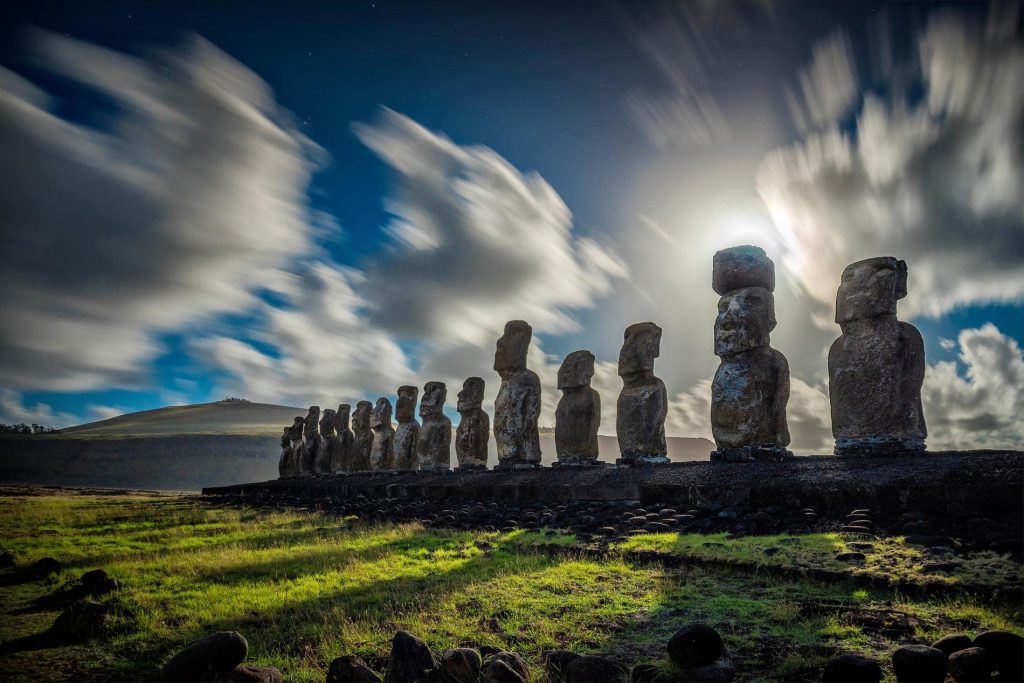 Discovered in the South Pacific Ocean on the Easter Sunday of 1722, Easter Island is widely known today for the very large freestanding megalithic Moai watching over the island. Nearly 900 unique Moai have been carbon dated estimating their creation between 1100 and 1680 with an estimation of a year or more of work per statue. Each Moai is said to resemble the deceased head of an ancestor. Many of the of the massive 80 ton statues were chiseled from volcanic ash, remnant from the extinct volcanoes that originally formed the island. Methods of moving and lifting the Moai into place have remained an unexplained, controversial mystery. The Moai are astronomically aligned precisely, with seven, 18 ton statues pointing directly to the sun setting during the equinox, named for the Seven Sisters or Pleiades. Polynesians who inhabited Easter Island estimated to be between 300 and 800CE chose a representative of MakeMake, the great creator, titled the Bird Man each year to live in seclusion. Effigies of the Bird Man resemble a human with a bird head and wings distinctly similar to depictions found in the ancient Egyptian culture.

The mystery around the moai statues

The massive carved rock head figures known as “moai” are the primary attraction of this small island.

The heads were literally cut out of hard volcanic rock and were moved many kilometers to where they are located now. Even with modern technology it would be very difficult to produce such a large number of smoothly statues and also transport them to long distances.

The massive heads differ in design, some statues even have hats, others have complex eyes (built from multiple pieces of rocks), others have hands… The locals who carved them certainly had a good sense for art and didn’t just hurry to build them.

There are several Moai groups that look especially interesting. For example the ones on the side of the Rano Raraku Volcano, where you’ll find a picturesque landscape with lots of stone heads spread across it…

Easter Island Quest tries to answer to questions about the construction and transportation of the moai, not only looking at the technical part, but also at the possible reasons why they were erected.

Easter Island’s mysterious and troubled past 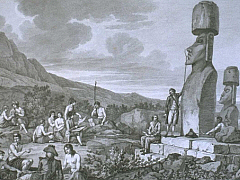 Several hundreds of years ago a group of Polynesians have set their feet on the shores of this island.

According to the traditions, they were led by Hotu Matu’a, sort of a tribal leader (“Ariki Mau”), some sources go further and even call him “The First King of Rapa Nui”.

Legends say that the settlers have arrived in 2 boats and numbered several hundreds of people.

Scientists have determined that the island was inhabited

The history of Easter Island is very rich and unfortunately tragic too. Initially having had a population of several hundred people, there was prosperity and joy, but overpopulation has lead to deforestation, starvation and therefore unrest.

Almost all trees were cut down and it became impossible for anyone to leave the island.

Major conflicts erupted, the many of the wonderful Moai statues were vandalized, even cannibalism appeared and was present for a long time, even after the arrival of colonists.