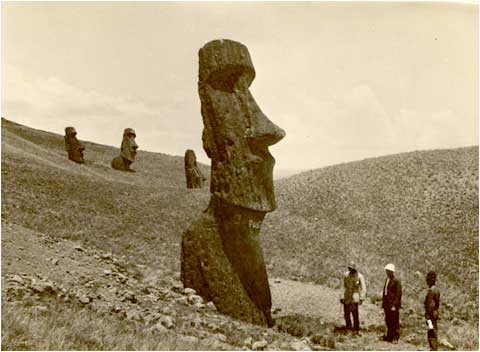 One of the astonishing facts about the stone statues or moai of Easter Island is that 95 per cent of them all came from the same quarry, known as Rano Raraku. Of the 887 statues known to exist on the island, 397 of them are still in situ at Rano Raraku and 288 are known to have made it to their final destination: the ahus or platforms that were built to support them. But one of the biggest riddles about Easter Island is how the statues ‘traveled’ from the quarry to their platforms or ahus, sometimes as far as 20 or 25 kilometres away?

As Patricia Vargas, director of the Easter Island Studies Institute at the University of Chile puts it, “when you have a massive production of these megalithic works on an island that is absolutely barren, with just grass, immediately it captures the imagination and you ask yourself ‘how did it all happen?'”
As she points out, in every place on the Earth where huge megalithic pieces of statues or stones were transported, the explanation of how they were moved always involves the use of logs and ropes and a lot of people. But that just didn’t seem to fit the Easter Island picture. After all, there are only rolling hills and virtually no trees. Or is that what Easter Island was always like?

Until the early 1970s, no one talked about an island with a different environment until pollen analyses were made and until excavations were carried out in detail,” says Vargas. Sure enough, those analyses started offering a lot of proof that there was a different landscape when the statue making was taking place – roughly between 1200 and 1600 AD. “There is certainty that the island had a wide variety of trees, including a huge type of palm that could get to be one metre wide,” she adds. “So, if we assume that the island has a different vegetation, and there were plenty of trees and different kinds of shrubs and plants that would make it easy to make cords and ropes, then the only thing you have to figure out is how they used these materials to transport the statues.

How the Rapa Nui people transported the moai across the island has eluded visitors and archeologists alike. That’s not to say that there haven’t been concerted efforts to come up with a plausible explanation. Rapa Nui legend has it that the moai “walked from the quarry”. Indeed, a drawing by a crew member aboard a 1728 Dutch voyage to Easter Island clearly depicts a standing moai being moved by people using ropes and perhaps even logs. But is this the real explanation?
It depends on the size and weight of the statue you’re talking about, says Vargas. “Since we have statues that measure from one metre up to 10 metres high, we must search for different methods of how to transport them. Some are very slender and very fragile. Others are very heavy and very easy to transport without a problem.”
It is possible that some of them could have been transported standing, which would have corresponded to the way the natives described it, but it’s unlikely that was the primary way. As Vargas suggests, “you can make skids out of logs and place the statue on top, standing or on its back, and just pull it. If you have enough rope and people to do it and a lot of time to do it, you could pull a huge weight.” This is quite similar to what one researcher from Los Angeles actually tried.
Jo Anne Van Tilburg is an archeologist from UCLA who’s made her life out of studying the mysteries of Rapa Nui. Recently she was bold enough to test her own hypothesis as to how the moai were moved. “My personal theory is that they transported them using the same technology that the larger Polynesian community used to build, move, sail, and handle the large voyaging canoes,” she says. “What I have developed is a theory which suggests that using the tools, the technology and the engineering expertise of the ancient mariners, they were able to move and erect the statues.” 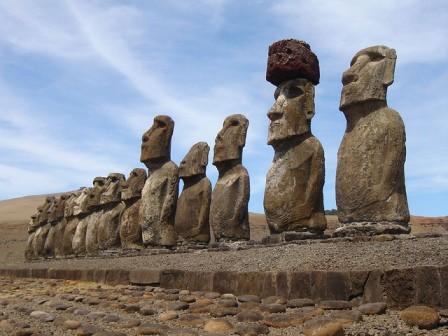 In essence, her theory suggests that the statue was placed horizontally on top of two large logs that were tied to the statue. Then, placing smaller logs underneath and perpendicular to the larger two logs, the statue could be rolled along using ropes and brute force.  To back up her theory she’s quick to point out that the average statue on Easter Island is smaller and not as heavy as some of the big hulls of the western Polynesian canoes. “And we know that we moved these over very rough terrain from very high altitudes to low altitudes before they launched them.”
So in April 1999 Van Tilburg and some colleagues tried it out and, in short, it worked. “My experiment shows that it took approximately 40 people to move an average statue and 20 people to erect it. And that it could have been done in less than 10 days,” she says proudly. But while it theoretically worked, there’s no certain way of knowing whether her theory is the ‘right’ one.

One method or many?

Vargas has seen or heard about all the theories, and there’ve been many – everything from extraterrestrial visitations to more plausible variations on Van Tilburg’s method. Vargas, however, is not quite willing to commit to one single answer. “I think it depends on where the statue was going, the conditions of the terrain and also how big or fragile the statue was,” she says. “In my mind, they were probably using more than one method.”
Whatever the method (or methods), Vargas does know one thing – having modern, state of the art machinery doesn’t necessarily make things easier when it comes to moving and erecting the moai. She and her colleagues from the University of Chile set up an experiment in 1992 to re-erect 15 statues on the southeast coast of the island – at Ahu Tongariti. These megalithic statues – some weighing 70 tonnes – were knocked down and widely dispersed by a devastating 1960 tsunami. “We had a really modern, computerized crane – the most advanced in the world – and we had a lot of trouble,” she admits. “In fact, it took us four years of work with a group of 40 people working day after day.”
So there’s no doubt in the minds of researchers that the Rapa Nui people had highly perfected the art of moving and erecting the moai using ways that might now be considered primitive. But their expertise and zeal in making the statues may have had a downside. Some have suggested that as the people of Easter Island became pre-occupied with making larger and larger statues after their arrival in the island, this pursuit may have been a contributing factor to the eventual collapse of their culture.