Is it really possible an advanced civilisation existed over 10,000 years ago?

In order to establish if it really is possible an advance civilisation existed sometime in our ancient origins – the timeline of modern man needs to be examined first! We know the earliest Homo sapiens fossil was found in Ethiopia, and has been dated to be 195,000 years old and we also know that man was wearing clothes at least 170,000 years ago. Likewise modern history suggests the earliest man made stone structure is just some 8500 years old.
This leaves a timespan of over 160,000 from when man was wearing clothes to man building the first stone structure. This does not seem accurate – when you consider the speed at which technology and inventions have developed during recorded modern history

During our early development – man’s progression was slow and stepped – one invention leading into another similar invention – but that unexplainable changed about 50,000 years ago.
Human culture then started to change at much greater speed: “Modern” humans started to bury their dead carefully, made advanced clothing out of hides, developed sophisticated hunting techniques (such as pitfall traps, or driving animals to fall off cliffs), and made cave paintings.
This speed-up of cultural change seems connected with the arrival of modern humans, Homo sapiens sapiens. Additionally, human culture began to become more technologically advanced, in that different populations of humans begin to create novelty in existing technologies. Artifacts such as fish hooks, buttons, and bone needles begin to show signs of variation among different population of humans, something what had not been seen in human cultures prior to 50,000 BP.

Man’s timeline therefore has about 30,000 years of advance progression and technology missing!. Where did we live? What civilisations developed? What did we build? How did we communicate and keep records?

The Mystery of the Sphinx age

One such researcher into the “missing years” is Robert Bauval, he has spent decades studying the Sphinx, its origins, and its purpose or meaning. His theory, known as the Orion Correlation Theory, proposes that the Sphinx and the pyramids had a correlation with the belt of the constellation Orion, and furthermore, in 10450 BC, this alignment would have been perfect.

What is interesting is that this would make the Sphinx at least 12,500 years old, much older than mainstream historians state it to be.

The famous geologist Robert Schoch, claims that water erosion around the sides of the Sphinx is testament to its real age. According to Schoch’s research, this corrosion has taken place over thousands of years, which would mean regular and consistent rainfall. This is something that Egypt has not experienced, according to geological records, since somewhere between 7,000 and 12,000 years ago (and probably on the older end of that range).

If this is the case, then this proves that the Sphinx would be 12,000 years old, if not older.

Some studies, speculative as they are, even date the Sphinx in terms of hundreds of thousands of years

Did unknown civilisations have advanced technology before these cultures? 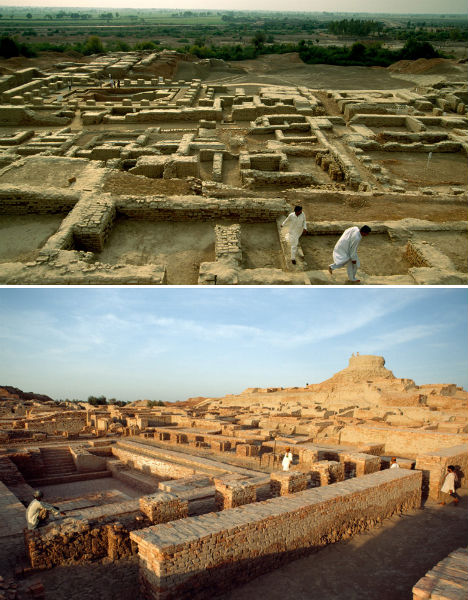 The Clovis were the first human inhabitants of the New World. This prehistoric Native American culture resided in North America and dates back to 10,000 BC. There are several theories about their decline such as a comet that crashed to the Earth and the lack of food source. Interestingly – evidence suggests from ancient legends that they had unexplained knowledge about the solar system.

The first known civilization in Europe, the Minoans, inhabited Crete from 3000 to 1000 BC. Their culture focused on social organization, art and commerce. It is believed that their disappearance was caused by a volcanic eruption on the island of Thera (Santorini) or by the Mycenaean invasion.