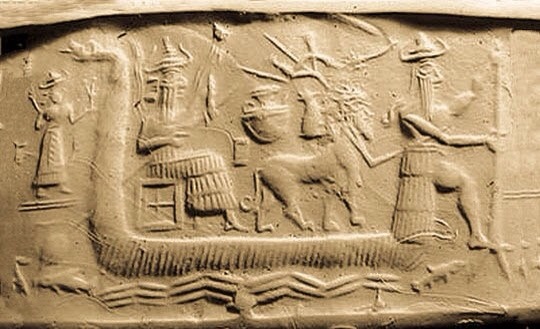 SUMERIAN FLOOD STORY – The British Museum has put on display an amazing, 4,000-year-old Mesopotamian tablet. The tablet is full of cuneiform inscriptions and describes Noah’s Ark. Like in the Bible, but different. This tablet was discovered some years ago, but now it has been deciphered. It is a very detailed description of how to build Noah’s Ark, like a construction manual.

The amazing thing about this tablet is that it is the first time a description of Noah’s Ark was found. It has been known for a long time that the flood story is in origin a Sumerian story, but the actual description of the ark is new.

Surprisingly, the ancient tablet states that an ark – contrary to what most of us imagine – is a round vessel. In order to survive a major flood, one needs to build it 220 feet in diameter, with 20 feet high walls. It should have two levels and a roof, and be divided into sections to separate the animals. The cuneiform tablet suggest using ropes, reeds and bitumen as building materials.

Specialists point out that it is quite logical that Noah’s Ark would have been round. A coracle or round ship was in fact a common vessel in ancient times. Coracles were usually small boats or one or a few people. The ark did not actually need to navigate seas or oceans. All it had to do is float. People and animals could then wait until the flood was over.

Is it really that simple? Noah’s Ark was just a larger version of a common type of boat in ancient times? Could be. But could a simple, ancient coracle made of ropes, reeds and bitumen be that large? And carry that many animals and people?

What if the ancient people who wrote down the description of the ark used familiar words to describe something unfamiliar? Could there have been a spaceship, and alien visitors that gave man these instructions? Maybe ‘ropes’ and ‘reeds’ stand for something else, some electrical wiring or tubes. Maybe the ship ‘floated’ in the air, not on water. The tablet cannot give us that much information of course. But it is not impossible.