AROUND THE TURN OF THE 19TH CENTURY THERE WERE HUNDREDS OF REPORTS FROM REPUTABLE SOURCES OF GIANT SKELETONS UNEARTHED FROM ANCIENT BURIAL MOUNDS ACROSS AMERICA.

Discoveries of the giant skeletons were found all over the northeast, from Martha’s Vineyard and Deerfield Valley Massachusetts, to Vermont and upstate New York. Other reports of the discovery of buried giants were also found in the south, midwest and west coast.
In the Ohio River Valley, a report from a local paper, that was backed up by Scientific American, found bodies of several giants buried under a ten foot tall mound. One female skeleton was found holding a three-and-a-half-foot long child. Another of the giant skeletons was buried in a clay coffin and an engraved stone tablet was also recovered. This particular mound was 64 feet long by 35 feet wide.

The history books deny that giants existed! Although so much evidence exists pointing towards the fact that giants once walked the planet.

1. Large bones in stone graves in Williamson County and White County, Tennessee. Discovered in the early 1800s, the average stature of these giants was 7 feet tall.

2. Giant skeletons found in the mid-1800s in New York state near Rutland and Rodman.

3. In 1833, soldiers digging at Lompock Rancho, California, discovered a male skeleton 12 feet tall. The skeleton was surrounded by caved shells, stone axes, other artifacts. The skeleton had double rows of upper and lower teeth. Unfortunately, this body was secretly buried because the local Indians became upset about the remains.

4. A giant skull and vertebrae found in Wisconsin and Kansas City.

5. A giant found off the California Coast on Santa Rosa Island in the 1800s was distinguished by its double rows of teeth.

7. Skeletons of “enormous dimensions” were found in mounds near Zanesville, Ohio, and Warren, Minnesota, in the 1880s.

8. In Clearwater Minnesota, the skeletons of seven giants were found in mounds. These had receding foreheads and complete double dentition.

9. At Le Crescent, Wisconsin, mounds were found to contain giant bones. Five miles north near Dresbach, the bones of people over 8 feet tall were found.

10. In 1888 seven skeletons ranging from seven to 8 feet tall were
discovered.

11. Near Toledo, Ohio, 20 skeletons were discovered with jaws and teeth “twice as large as those of present day people.” The account also noted that odd hieroglyphics were found with the bodies.

13. This mummy eventually went to a fraternal lodge where it was used for “initiation purposes.”

15. In 1932, Ellis Wright found human tracks in the gypsum rock at White Sands, New Mexico. His discovery was later backed up by Fred Arthur, Supervisor of the Lincoln National Park and others who reported that each footprint was 22 inches long and from 8 to 10 inches wide. They were certain the prints were human in origin due to the outline of the perfect prints coupled with a readily apparent instep.

16. During World War II, author Ivan T. Sanderson tells of how his crew was bulldozing through sedimentary rock when it stumbled upon what appeared to be a graveyard. In it were crania that measured from 22 to 24 inches from base to crown nearly three times as large as an adult human skull. Had the creatures to whom these skulls belonged been properly proportioned, they undoubtedly would have been at least 12 feet tall or taller.

17. In 1947 a local newspaper reported the discovery of nine-foot-tall skeletons by amateur archeologists working in Death Valley.

18. The archeologists involved also claimed to have found what appeared to be the bones of tigers and dinosaurs with the human remains.

19. The Catalina Islands, off California, are the home of dwarf mammoth bones that were once roasted in ancient fire pits. These were roasted and eaten by human-like creatures who were giants with double rows of teeth. 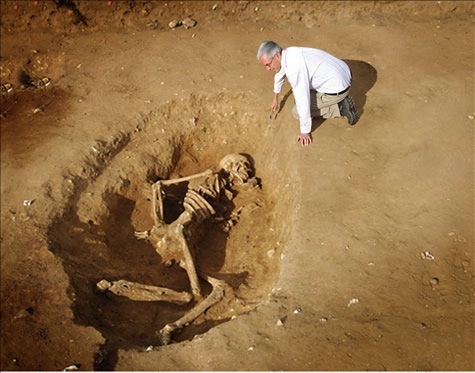