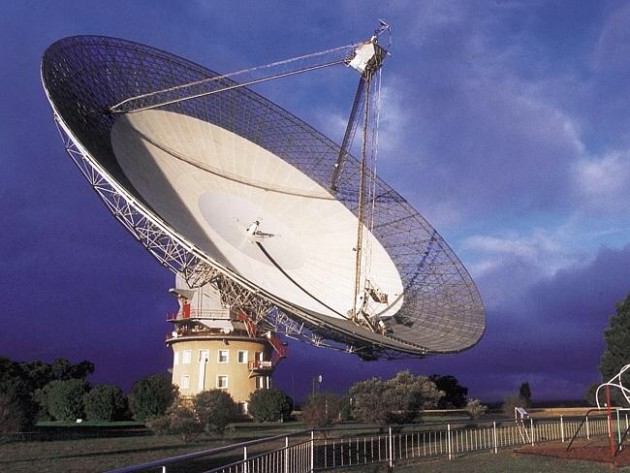 SCIENTISTS are investigating unexplainable bursts of radio waves that could be messages from alien life forms, after an Australian team stumbled upon the phenomenon.

Ten of the bizarre flashes have been picked up by radio telescope over the past 15 years, displaying a mathematical pattern that has bamboozled experts, in a real-life version of the 1997 sci-fi film Contact.

Lasting just a few milliseconds, the radio bursts erupt with about as much energy as the sun releases in a month, New Scientist reports.

It all started last year at the CSIRO’s Parkes Telescope in central-west New South Wales, which last year picked up a radio burst in real-time, a world first that sparked a hunt through data that unearthed nine similar events.

The Parkes radio telescope in NSW was the first to detect a fast bursts of radio waves (FRB) last year. Source: Supplied

What makes them so unusual is that the delay between the arrival of the first and last waves of each burst is always close to a multiple of 187.5, a mathematical phenomenon for which no explanation has been found.

The brevity of the bursts, and the distance between their lower and higher frequency waves, means they are likely to come from a source that is both extremely small — hundreds of kilometres across at most — and very far away, possibly in another galaxy.

The analysis was undertaken by Michael Hippke of the Institute for Data Analysis in Neukirchen-Vluyn, Germany, and John Learned at the University of Hawaii in Manoa, who concluded that there was a 5 in 10,000 probability of the mathematical phenomenon being a coincidence.

The researchers explored several possible explanations for the fast bursts of radio waves, but concur the best solution is an alien broadcast.